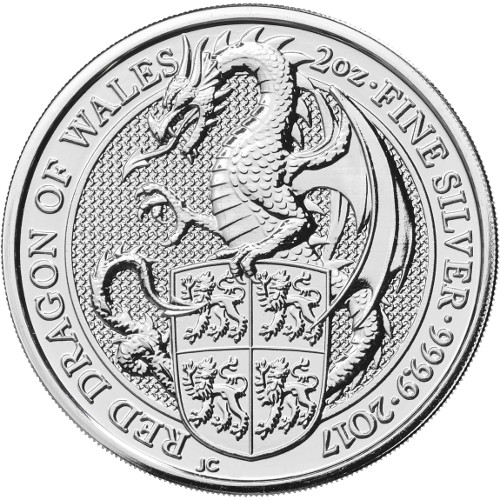 When Queen Elizabeth II stepped forward to official accept the crown of Queen of England in 1953, there were 10 wooden statues created by James Woodford that surrounded her during the ceremony. A series that started with the Lion of England continues now in 2017 with the release of a design commemorating the Red Dragon of Wales. Today, the 2017 2 oz Silver British Queen’s Beast Dragon Coin is available to you online at Silver.com.

When Queen Elizabeth II was crowned Queen of England in 1952, her official coronation ceremony actually didn’t occur until early 1953. When it did happen, there were 10 creatures sculpted to represent the history of the British monarch which stood around her in Westminster Abbey.

Each of the creations stood six feet tall and represented the various strands of Britain’s royal ancestry that were about to be brought under one banner by the young Elizabeth. All of the statues were sculpted by famed artist James Woodford RA, and today the originals can be found on display at the Canadian Museum of History in Quebec, Canada.

All of the 2017 2 oz Silver British Queen’s Beast Dragon Coins in this listing are in BU condition. Coins in BU condition show no signs of wear and tear, however you may notice minor flaws including breaks in the luster, spotted surfaces, and contact marks from the production process at the mint.

Please don’t hesitate to reach out to Silver.com with questions. You can contact us on the phone at 888-989-7223, on the web using our live chat, and via our email address. Feel free to visit our website at any time to check the silver price per ounce.