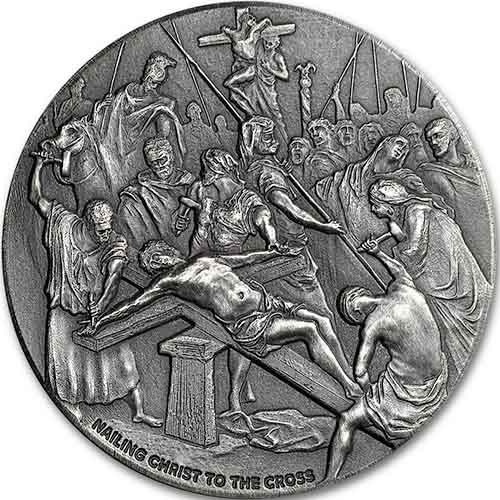 Often referred to collectively as the Passion, the suffering and death of Jesus on the cross are central to the Christian theology when it comes to the redemptive power of Christ’s death, and teachings of atonement and salvation. One of the most gruesome moments in the Bible comes when Christ is nailed to the cross to die for mankind. The 2017 2 oz Silver Nailing Christ to the Cross Biblical Coin brings this to form in a new way and is available for purchase online today at Silver.com.

Jesus Christ was crucified by the Romans after his arrest, trial, and sentencing at the hands of Pontius Pilate, Roman governor of Judea during the first century AD. After he was led through the streets of Jerusalem carrying his own cross, he was brought to the top of Mount Calvary and nailed to that same cross.

Crucifixion was a brutal process through which individuals were tortured until dead. After his hands and feet were nailed to the cross, it is recounted that Jesus made seven statements as he hung there dying and the crowd witnessed several supernatural events. A plaque above his cross read “Jesus of Nazareth, King of the Jews.”

The obverse of all coins in the Silver Biblical Series feature the 1984 depiction of Queen Elizabeth II created by Raphael Maklouf. This right-profile portrait was on circulation British and commonwealth coinage from 1984 until 1997 when it was replaced by Ian Rank-Broadley’s fourth-generation effigy.

On the reverse of the 2017 2 oz Silver Nailing Christ to the Cross Biblical Coin you’ll find the cross laid out upon which Jesus lays as he is being nailed down to it. Workers hold his hands out and feet together to drive stakes through them as criminals are raised to their crosses in the background and a frenzied crowd is held at bay by Roman soldiers.

Scottsdale Mint is the production facility of the Silver Biblical Coin series, working in tandem with the nation of Niue. These coins ship inside of Bible-themed display boxes and include numbered Certificates of Authenticity that match the serial numbers laser-engraved on each coin’s edge.

We encourage all Silver.com customers to contact us with questions. You can call us at 888-989-7223, chat with us live online, or send us an email with your inquiries. Don’t forget to check the latest price of gold and silver on our homepage when shopping!