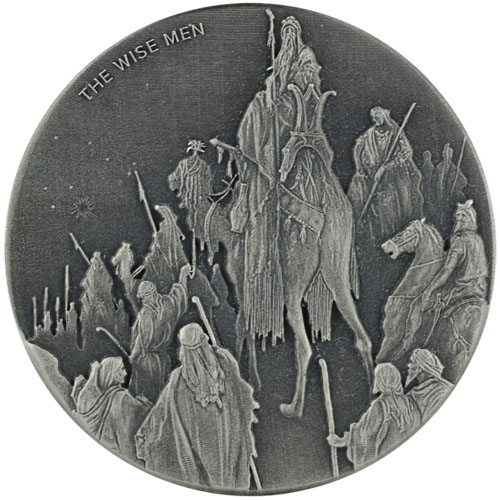 The Biblical Silver Coin Series from the Scottsdale Mint is one of the most robust offerings in the precious metals industry right now. Struck for the nation of Niue, these silver coins for sale include six new designs with each year’s release schedule, and each one features a new design inspired by the stories of the Bible. Right now, 2017 2 oz Silver The Wise Men Biblical Series Coins are available to purchase online at Silver.com.

Each of the 2017 2 oz Silver The Wise Men Biblical Series coins ships in the same packaging featured for all coins in the collection. Individual coins in this series are encapsulated and placed within a display box that depicts the Bible. The coins have laser-etched serial numbers on the edge, denoting their place in the production lineup from 1 to 1,499 and include a Certificate of Authenticity with that same figure.

The story of the Three Wise Men in the Bible is often depicted as occurring on the night of Christ’s birth in the town of Bethlehem. In fact, traditional manger scenes include the Three Wise Men on the night of Christ’s birth alongside the animals of the barn and his father Joseph and mother Mary. In reality, many biblical scholars admit this depiction is a matter of convenience, and that the Wise Men actually visited Christ and his mother alone in a home some time after his birth.

On the obverse of the 2017 2 oz Silver The Wise Men Biblical Series coin is the image of Queen Elizabeth II. For this coin series, the Scottsdale Mint has chosen the image of Her Majesty used from 1984 to 1997. This third-generation effigy was created by Raphael Maklouf and captures Queen Elizabeth II in her coronation crown with features that capture her physical appearance in a timeless and regal pose.

The reverse of all Silver The Wise Men Biblical Coins features the scene depicted in the Bible as the Three Wise Men travel to visit the newborn “king of the Jews.” Known alternatively as the Magi, these three individuals are known as foreign dignitaries traveling across the desert to greet the newborn king with gifts of gold, frankincense, and myrrh.