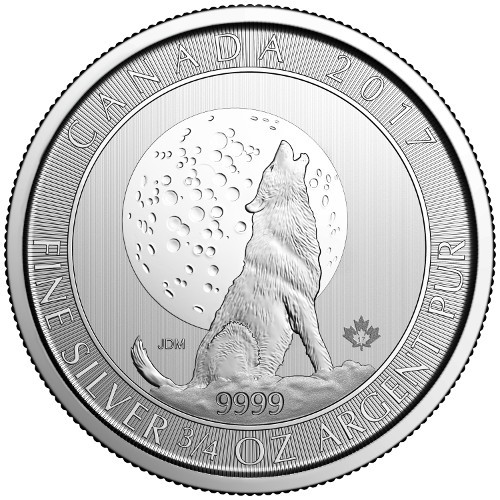 One of the most popular figures to grace Royal Canadian Mint coinage has returned again, with the Grey Wolf appearing on a commemorative silver coin for the fourth time in recent history. Grey Wolves first appeared on Canadian currency in 2006, and since then have appeared on numerous other occasions. Right now, the  2017 3/4 oz Silver Canadian Wolf Moon Coin is available to purchase online at Silver.com.

Each  2017 3/4 oz Silver Canadian Wolf Moon Coin available today from Silver.com is in BU condition. Coins in BU condition are identified by a lack of wear and tear, but the possible existence of breaks in the luster, spotted surfaces, or contact marks from the coining process.

The Grey Wolf is a canine species native to wild and remote parts of both Eurasia and North America. It is the largest extant member of the canid family, with males weighing upwards of 99 lbs. and females reaching 85 lbs. Wolves in the wild are apex predators, with only humans and tigers (Eurasia) posing a serious threat to its existence.

2015 ¾ oz Silver Canadian Wolf coins were the first release in the planned series of four coins from the Royal Canadian Mint. Subsequent designs, scheduled for one release annually, will feature new reverse designs depicting the wolf in a different manner.

The obverse of the Silver Canadian Wolf Coin includes the right-profile image of Queen Elizabeth II, as created in 2003 by Canadian artist Susanna Blunt. Her portrait is featured on all Canadian currency, and this design was rolled out on Canadian coins starting in 2004.

On the reverse of the  2017 3/4 oz Silver Canadian Wolf Moon Coin is the image of a lone wolf sitting on the top of a rocky outcrop. A large, oversized moon rises into the sky behind the wolf, outlining its body as it raises its head toward the heavens to let out its eerie howl into the night’s sky.

The ¾ oz Silver Canadian Grey Wolf Howling Wolves Series was the first-ever ¾ oz. silver coin from the Royal Canadian Mint when introduced in 2015, but today is joined by other products of the same weight from the nation’s sovereign mint.