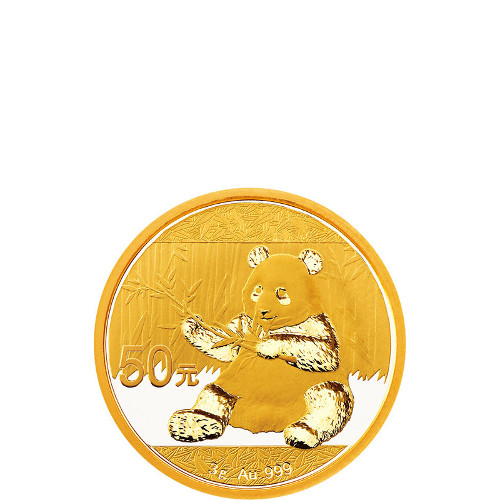 In 1982, the Chinese Mint released the first Gold Chinese Panda Coins. Just like many other bullion coin programs, these coins feature an animal that is native to the issuing country. The panda isn’t only native to the land, but it is also important to Chinese history and culture.

In 2016, the Chinese Panda Coins switched from ounces to grams, which makes sense as China uses the metric system. The 3 gram coins replace the old 1/10 oz issues.

On the obverse of each 2017 3 Gram Gold Chinese Panda Coin, you will see a panda in detail holding a branch of bamboo. The panda is eating the leaves off the branch. Pandas are well-known for eating bamboo, so this year’s design showcases that.

The reverse of each coin features the Temple of Heaven. This temple is located in Beijing and was built in the 15th century. Other engravings on this side of the coin include “People’s Republic of China” and the year of issue.

All of the coins in this listing are available in Brilliant Uncirculated condition. This means that there will be no signs of wear and tear, but you may still see minor flaws, such as breaks in luster, spots on the surface and contact marks made during the minting process.

If you have questions, feel free to reach out to Silver.com customer service representatives. You can call us at 888-989-7223, chat with us live online, or submit your questions via email.