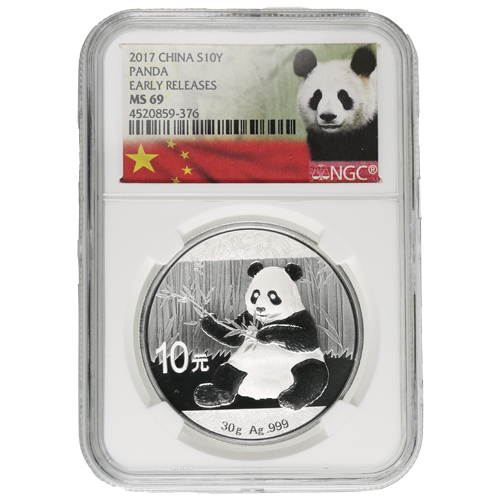 The reverse of the 2017 30 Gram Silver Chinese Panda includes the outer facade of the Temple of Heaven. Engravings on this side include the Mandarin-language text of “People’s Republic of China,” as well as the year of issue for the coins.

On the obverse of the 2017 30 Gram Silver Chinese Panda is the newest panda design from the Chinese Mint, which depicts a large panda sitting on its hind quarters as it eats some bamboo shoots. The typical engravings and design features included again this year feature the bamboo wall in the background, and the face value of the coin in Yuan.

The 2017 30 Gram Silver Chinese Panda coins here today are in near-perfect condition according to the NGC. Coins in Mint State 69 condition have full, original mint luster and a maximum of two minor detracting flaws. These flaws are limited to miniscule hairlines or contact marks, and found only outside of the primary focal areas.

All Silver Chinese Panda Coins are produced by the Chinese Mint. Operating numerous mints throughout the country, the Chinese Mint does not use mint marks on any of its coins, making it impossible to identify the mint of origin for any of its products.

We encourage all Silver.com customers to contact us with questions at 888-989-7223, chat with us live online, or email us directly.