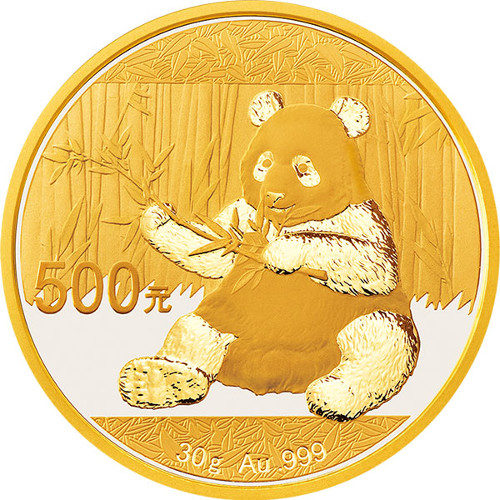 More and more often investors are buying gold in grams to meet their needs because of its divisibility. Gold prices change frequently, but can always be divided by 31.1 grams to get price per gram.

Giant Pandas are native to China; they reside in the south-central highlands of the country. These herbivores are known to eat bamboo. The Giant Panda was on the endangered species list since the 1980s, but in 2016, the number of pandas reached a point to where the black and white creature was finally able to get off the Endangered Species List.

Like a few other coin programs, the Chinese Panda Coins have a changing design every year. This means that each year is even more collectible, because the design won’t be on coins from another year. While the obverse design is always changing, the reverse stays the same every year.

The reverse of each coin bears the image of the Temple of Heaven, which was built in the 15th century. The temple is located in south-central Beijing and is actually just one building in a complex of religious buildings and social gathering sites.

On the obverse of the 2017 Gold Pandas, you will see a panda eating leaves off a bamboo twig. This year’s design is simple, but beautiful. Since the design changes year-after-year, you won’t see this design again. Only the 2001/2002 design was used more than once. Typically, the designs show a panda with bamboo, its food of choice.

Chinese Gold Pandas are minted by the Chinese Mint. While there are a number of mints in China, they don’t use mint marks on their coins, so it is impossible to know where each coin was produced.

Please direct your questions to a Silver.com associate at 888-989-7223. We’re also available online using our live chat and email features.