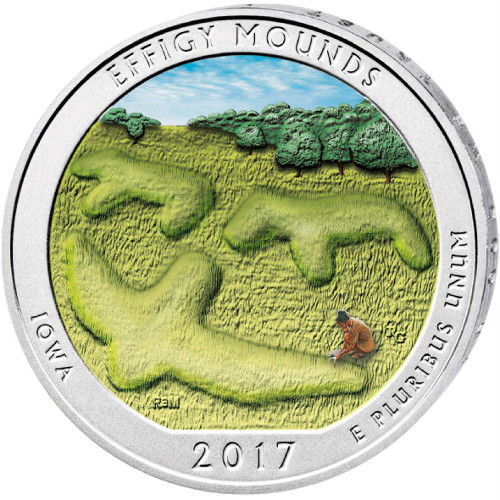 The America the Beautiful Series of silver coins from the United States Mint are hot sellers on an annual basis, with five new releases each year and a total of 56 coins planned when the program is all said and done. Today, the 2017 5 oz Colorized ATB Silver Effigy Mounds National Monument Coin is available to you online at Silver.com with a beautiful finish.

The Effigy Mounds National Monument is a federally protected area in the state of Iowa, in Allamakee and Clayton Counties, that preserves more than 200 prehistoric mounds built by various Native American tribes. The mounds have various shapes, with the most common including bears and birds, and were built during the first millennium.

All 2017 5 oz Silver Effigy Mounds National Monument Coins in this listing are in BU condition. Coins in BU condition have no signs of wear and tear on the surfaces, though you may notice a range of minor flaws including breaks in the luster, spotted surfaces, and contact marks from the coining process at the mint.

The obverse of all ATB Silver Effigy Mounds National Monument coins includes the common obverse design theme, that of President George Washington. This left-profile portrait has appeared on the circulation 25-cent piece since 1932 and was created by John Flanagan.

On the reverse of the 2017 5 oz Colorized ATB Silver Effigy Mounds National Monument Coin is the image of some of the mounds created by the people of the Woodland Cultures. Included are engravings of the state of issue, representative park, and the year of issue.

These colorized coins are a product of the United States Mint, originally, however the US Mint does not colorize its own coins. The enamel layering was applied post-production by Emporium Hamburg, an authorized third-party dealer in Germany.

Please direct your questions regarding these silver coins for sale to Silver.com. Our customer service team is available at 888-989-7223, online via our live chat, or by simply sending us an email.