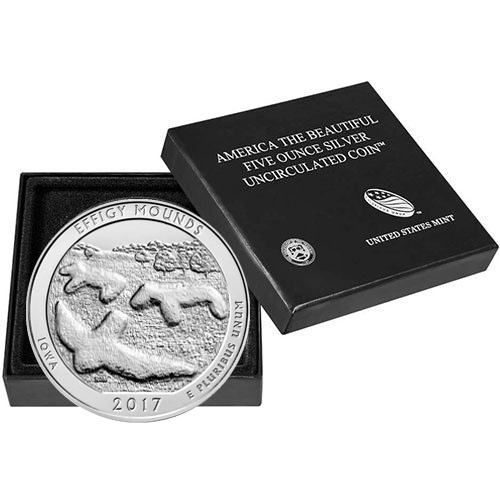 Effigy Mounds National Monument in Iowa preserves the culture of the Woodland people of North America. Located in Allamakee County, Iowa, the park preserves more than 200 prehistoric mounds built in the area which resemble animals such as birds and bears. The national monument is part of the ATB Series from the US Mint. The 2017-P 5 oz Burnished Silver ATB Effigy Mounds National Monument Coin is currently available to you for purchase online at Silver.com.

The United States is home to cultural artifacts that vastly predate the founding of the modern nation. Among these are the mounds of Effigy Mounds National Monument in Iowa. Though these particular mounds are located in the Midwest, mounds in the shapes of mammals, birds, and reptiles have been found throughout the United States from Iowa, Wisconsin, and Minnesota to Illinois, southeastern Ohio, and even Louisiana.

Effigy Mounds National Monument in Iowa celebrates the Woodland Culture, a people that inhabited the area during the first millennium. There are some 200 prehistoric mounds of earth shaped to look like mammals and birds in this region and the park covers a scant 2,526 acres of land.

On the reverse side of the 2017-P 5 oz Burnished Silver ATB Effigy Mounds National Monument Coin is an aerial view of some of the mounds found within the park. This particular depiction includes the marching bear group within the park which depicts two bears walking in a line with a bird also included in the design.

The obverse side of all Burnished ATB Silver Coins includes the image of President George Washington. This left-profile portrait is the same one which you’ll find on the circulation US quarter and it was created in 1932 by John Flanagan on the 200th anniversary of Washington’s birthday.

These 2017-P 5 oz Burnished Silver ATB Effigy Mounds National Monument Coins ship in capsules and are housed in US Mint display boxes. Each silver coin comes with its own Certificate of Authenticity and includes a “P” mint mark from the Philadelphia Mint on the obverse.