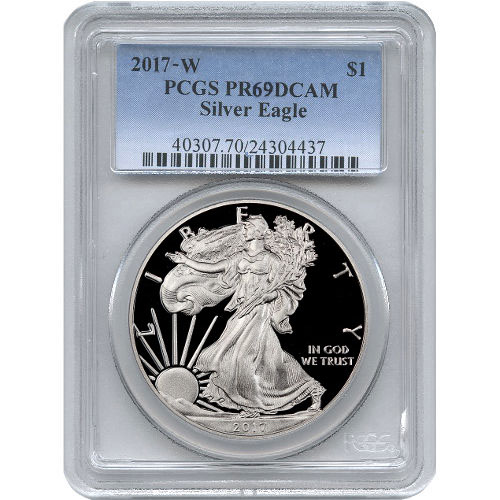 When it comes to buying silver, collectors the world over look to add the Proof Silver American Eagle coin to their collection. This beautiful silver proof features iconic images of America, from Lady Liberty to the national symbol of the bald eagle. The 2017-W 1 oz Proof Silver American Eagle coin is now available to you online at Silver.com with a near-perfect certification from the PCGS.

All 2017 Proof Silver American Eagle coins in this listing have PR69 grades from the PCGS. Coins in this condition exhibit full, original mint luster, but also feature a maximum of two minor detracting flaws such as minuscule hairlines. All flaws are found outside the primary focal areas of the coin.

The DCAM, or deep-cameo, designation on these coins is reserved for only the most beautiful proof coins. A DCAM coin features a strong, frosted matte finish on the design sets and a deeply-mirrored, clear background field. The combined visual effect of these features is the impression of the design floating over the coin’s surface.

We encourage all Silver.com customers to contact us with questions at 888-989-7223. You can also live chat with us online or send us an email.