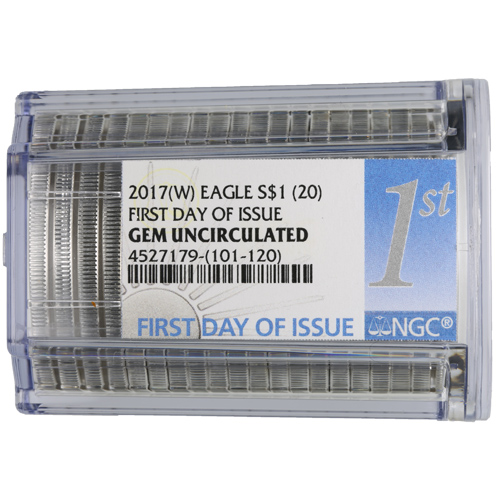 The official silver bullion coin of the United States is the Silver American Eagle, which bears an iconic image found on early 20th century American coinage. All American Eagle coins feature images of Liberty on one face and the American bald eagle on the opposite side. The 2017 Silver American Eagle Coin is available to you for purchase online today at Silver.com in a brilliant NGC Gem Roll.

On the obverse of all Silver American Eagle coins is the image of Lady Liberty as created by Adolph A. Weinman. First featured on the Walking Liberty Half Dollar from 1916 to 1947, Weinman’s depiction features Lady Liberty striding forward toward the setting sun, and is symbolic of the nation’s drive toward a brighter future.

The reverse features the image of the heraldic eagle. Designed by John Mercanti in 1986 for the Silver American Eagle, this creation features the bald eagle set behind a shield, with arrows in one talon and an olive branch in the other.

In this Silver.com listing, the 2017 Silver Eagles are available in an NGC Gem Roll. These coins have been adjudged by the Numismatic Guaranty Corporation to be in BU condition. Coins in this condition show no signs of wear and tear, though you may notice minor flaws such as breaks in the luster, spotted surfaces, and contact marks from the production process.

The United States Mint is responsible for production of all Silver American Eagle coins. The West Point Mint is the primary production facility for bullion versions, with supplemental assistance from the San Francisco Mint to help meet the intense demand.

We encourage all Silver.com shoppers to reach out with questions. We’re available at 888-989-7223, online using our live chat, and via our email address. You can even check our website to find the current price of gold and silver.