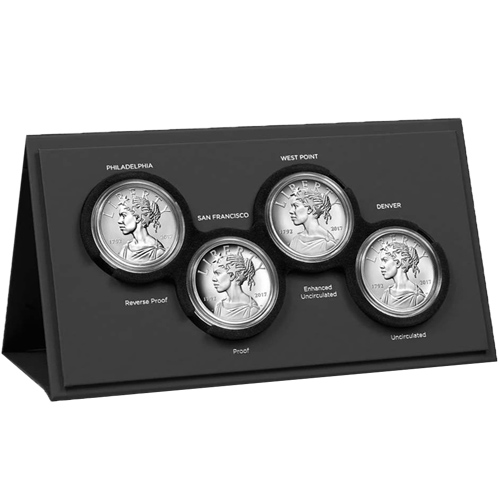 The United States Mint celebrated its 225th birthday in 2017 with the release of a stunning new Liberty design on several gold and silver bullion products. This new vision of Liberty reflected the many cultures and ethnicities that make up the country by envisioning Liberty as an African-American woman for the first time. This inspiring design was featured on four unique silver medals in a collectible set. Right now, 2017 Silver American Liberty 225th Anniversary 4-Medal Sets are available to purchase online at Silver.com.

Each of the 2017 Silver American Liberty 225th Anniversary 4-Medal Sets in this listing comes with a protective box from the United States Mint and a Certificate of Authenticity. The set features a folding case that houses the four silver medals, each one with its own identifiable slot that tells the version and mint of origin housed in that spot. The case folds into a triangular shape for easy display.

The obverse face of the silver medals in the Silver 225th Anniversary 4-Medal Set bears an effigy of Liberty in left-profile relief with a crown of five-pointed stars. The African-American woman wears the same crown from the Statue of Freedom that tops the arcade of the U.S. Capitol Building.

On the reverse side of 2017 Silver American Liberty 225th Anniversary Medals is an American bald eagle in flight. The bird flaps its wings as it soars through the air. The medals have mint marks matching the version and mint of issue as “S,” “P,” “D,” and “W.”

If you have any questions for Silver.com customer service, please don’t hesitate to reach out to us. You can call us on the phone at 888-989-7223, chat with us live online, or simply send us an email.