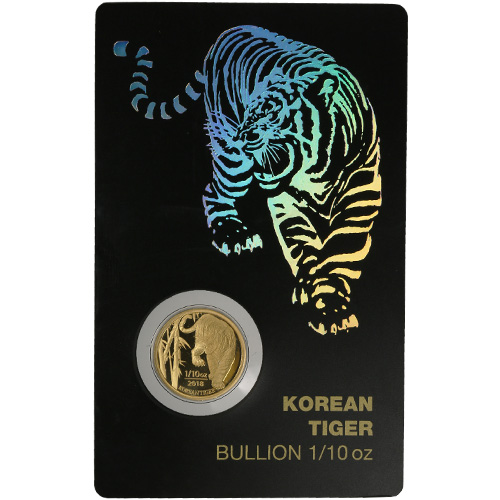 The Siberian tiger is well known around the world today as one of the largest predatory cats in the world. Historically speaking, the cats range extended from Far Eastern Russia down through Mongolia and China to the southern tip of the Korean peninsula. Known official as the Siberian tiger, locals uses different names for the cats in particular regions, to include Amur tiger, Manchurian tiger, Ussurian tiger, and the Korean tiger.

In Korean culture, the tiger is a very critical animal. The tiger mentioned several times in the foundation mythology of Korea and is used commonly in folklore, art, painting, and various sculptures. When the 1988 Summer Olympics were hosted in Seoul, South Korea, the Hodori was the official mascot of the games. Hodori was a stylized tiger made to represent the Korean people.

On the obverse of 2018 1/10 oz Gold South Korean Tiger Medal is the design of a Siberian tiger. Last seen around Mount Daeduk in 1922 on the Korean peninsula, the Korean tiger depicted here stalks its prey from the other side of a wall of bamboo.

These 2018 1/10 oz Gold South Korean Tiger Medals are available to you in Brilliant Uncirculated condition with a unique assay card. The sealed packaging includes the colorized image of a tiger in a similar pose as the obverse of the coin with pertinent information on the card, including the weight, purity, metal content, and the serial number of the individual gold medal.