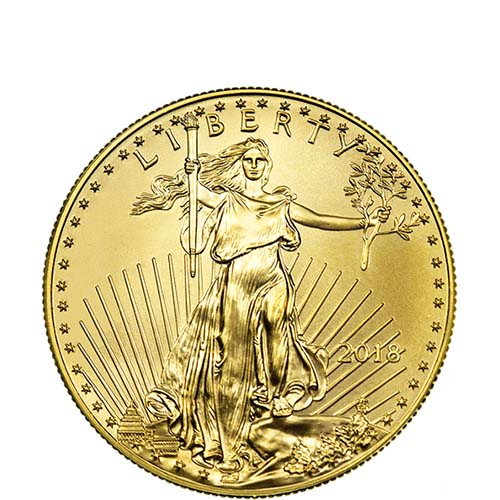 As the official gold bullion coin of the United States, the Gold American Eagle Series carries designs that have some of the most significant and meaningful imagery on any American coin. Like other American Eagle coins, such as the silver and platinum version, the Gold Eagles feature Lady Liberty on one side and the bald eagle on the other. The 2018 ½ oz Gold American Eagle Coin is now available for you to purchase online at Silver.com.

When it comes to buying gold, the swings in demand and mintage for the ½ oz Gold Eagle coin are much less severe than the 1 oz and 1/10 oz options. Whether prices rise or fall, the volume of change in production for the ½ oz and ¼ oz coins rises and falls more steadily.

On the obverse of 2018 ½ oz Gold American Eagle Coins is the image of Liberty created by Augustus Saint-Gaudens in 1907. The original design included only 46 stars around her figure, reflective of the number of states in the Union at that time. Used on the $20 Gold Double Eagle from 1907 to 1933, the design was revived in 1986 for the Gold Eagle and now features 50 stars encircling Liberty.

The reverse of all Gold American Eagles includes the design from Miley Busiek. Created in 1986 specifically for the Gold Eagle Series, this design features an eagle in flight returning to a nest where another adult eagle watches over a group of young hatchlings.

All 2018 ½ oz Gold American Eagles are in BU condition. Coins in BU condition show no signs of wear and tear, but can feature minor production flaws such as breaks in the luster, spotted surfaces, and contact marks.

We encourage Silver.com customers to contact us with questions. You can call us at 888-989-7223, chat with us live online, or simply email us.