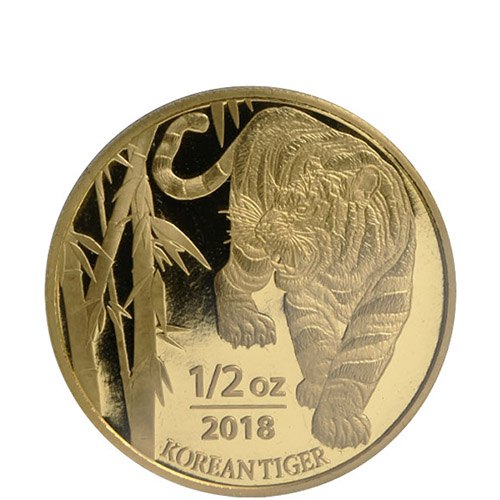 Any quantity available for $89.99 per coin over spot!

The 2016 issue year for KOMSCO was a big one on the international stage. The official mint of the Republic of Korea debuted the popular Chiwoo Cheonwang collection and a distinct national issue featuring the image of a Korean tiger. The South Korean Tiger Medals are available now in both gold and silver, but started with a gold option first in 2016. Right now, you’ll find 2018 1/2 oz Gold South Korean Tiger Medals available to purchase online at Silver.com.

Each of the 2018 1/2 oz Gold South Korean Tiger Medals you can purchase here today comes in Brilliant Uncirculated condition. The coins are uniquely housed with a protective plastic capsule around the coin and the capsule set within a KOMSCO display box. Each one also includes a numbered Certificate of Authenticity, both of which are rare packaging and numbering options for gold bullion issues.

The Korean tiger is important to the people of Korea. Although the large cats have not roamed the wilds of the Korean peninsula since 1922, the species features prominently in Korean literature, art, and sculpting. In fact, the tiger is mentioned numerous times in the foundation mythology of Korea.

On the obverse of all 2018 1/2 oz Gold South Korean Tiger Medals is the image of a tiger stalking its prey from behind a wall of bamboo. The tiger has its mouth open and is ready to launch its attack at any moment.

The reverse face of 2018 Gold South Korean Tiger Medals includes an artistic depiction of the Korean peninsula. Here, the peninsula is depicted without borders and created using the letters of the Korean alphabet to fill in the shape of the peninsula itself. The medal has a latent security image on the right of the design, with the purity of “9999” featured inside, and the national symbol of South Korea to the left.

KOMSCO stands for Korea Minting and Security Printing Corporation. This government-owned entity serves as the official mint for the Republic of Korea, or South Korea, and was established in 1951 to provide stable and independent coining for the nation at the outset of the Korean War.