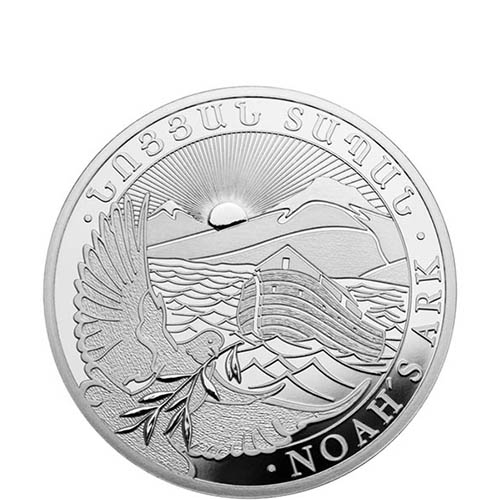 Silver Armenian Noah’s Ark coins were issued in 2011 by Geiger Edelmetalle with a ¼ oz, ½ oz, and 1 oz option for weights. The very next year in 2012, the mint expanded the program to feature 5 oz, 10 oz, 1 Kilo, and 5 Kilo coins. This expansion makes the Silver Noah’s Ark coin unlike many of its competitors in the annual bullion release industry.

All 2018 ½ oz Silver Armenian Noah’s Ark Coins listed here are in BU condition. Coins in this condition have no signs of wear and tear but do feature minor flaws. These flaws include breaks in the luster, spotted surfaces, and contact marks from the production process at the mint.

The use of Noah’s Ark in this coin series design is deeply embedded in Armenian history. Before the modern era, Mount Ararat, where the ark came to rest, was located within the borders of Armenia. Following World War I, the nation was split up between the Soviet Union and Turkey, with Turkey claiming a large share of Mount Ararat.

Beyond that, Armenia was among the first modern nations to adopt Christianity as an official state religion. As such, you’ll find Noah’s Ark in more places than one on the 2018 ½ oz Silver Armenian Noah’s Ark Coins.

The reverse of the Noah’s Ark coins features the large image of the ark built by Noah to save his family and two of every animal species in the world. The design includes the sun rising over Mount Ararat in the background as 40 days of rain and flooding end. A dove swoops into the foreground of the design with an olive branch.

On the obverse of the 2018 ½ oz Silver Armenian Noah’s Ark Coin is the nation’s coat of arms. This shield also includes the ark. In the center of the national shield there is a small version of Mount Ararat with the ark perched at its peak.