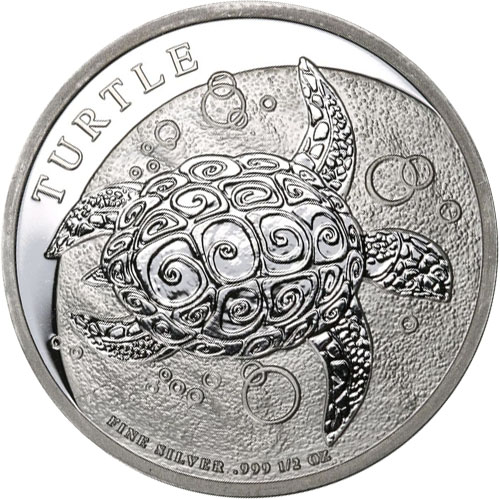 Few major silver bullion coin programs change their nation of issue after first being released. The Niue Hawksbill Turtle joins the Somalian Elephant coin as perhaps the only coins of their kind that spent years using the same designs for a different nation of issue. Now a popular annual release among investors worldwide, today you can get the 2018 1/2 oz Silver New Zealand $1 Niue Hawksbill Turtle Coin online at Silver.com.

First and foremost, the coins were known as the Fiji Taku, using the local Fijian language word for the hawksbill turtle as the name for the series. Also, the coins originally featured the effigy of Queen Elizabeth II on the obverse. For the final issue year for Fiji, the coins had the Fijian crest on the obverse instead.

The 2018 1/2 oz Silver Niue Hawksbill Turtle Coins available from Silver.com today are in BU condition. Coins in this condition show no signs of wear and tear, but there is the possibility for minor flaws. These issues stem from the production process and include the potential for breaks in the luster, spotted surfaces, and contact marks.

On the reverse of the Silver Niue Hawksbill Turtle coin is the image of the hawksbill. The turtle is depicted swimming through bubbly waters in the South Pacific, and there is a slice of the coin’s design field that features an engraving of the word “Turtle.” You’ll also find the weight, purity, and metal content engraved on this face.

The obverse of all 2018 1/2 oz Silver New Zealand Niue Hawksbill Turtle Coins features Her Majesty’s right-profile effigy. The portrait of Queen Elizabeth II featured on these coins is the fourth generation design for commonwealth coinage. It was created in 1998 by Ian Rank-Broadley.

New Zealand Mint is a private minting company in Auckland, and is the only private mint in the nation. It has no affiliation with the government of New Zealand though, as all legal-tender coins and banknotes for the nation are produced by the Royal Canadian Mint.

Please contact Silver.com if you have any questions about these silver coins. You can call us at 888-989-7223, chat with us live online, or simply send us an email.