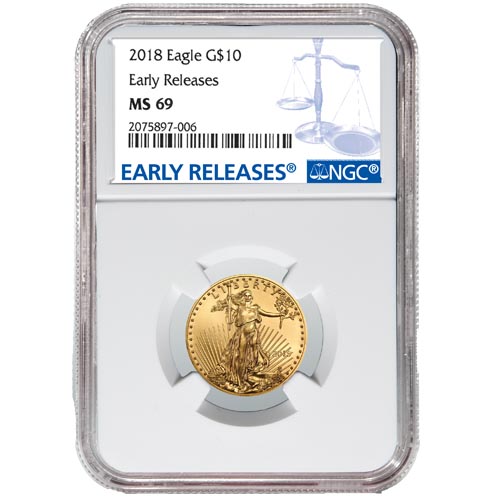 Among the Gold Eagle gold coins for sale annually from the United States Mint, there is great variety in demand for the coins. The 1 oz and 1/10 oz coins are historically the two most popular among the four available weights. The coin with the lowest demand is typically the ¼ oz Gold Eagle, resulting in low mintage figures each year. Today, 2018 ¼ oz Gold American Eagle Coins are available to you online at Silver.com with NGC certification!

All ¼ oz Gold American Eagle Coins in this listing are in near-perfect condition as noted by the NGC. Coins with a Mint State 69 grade have full, original mint luster and a maximum of two minor detracting flaws. These are limited to minuscule hairlines and/or contact marks found only outside the primary focal areas.

The Early Release designation identifies the time of receipt for certification. These coins arrived at the NGC or an approved third-party depository within 30 days of their 2018 release date from the United States Mint.

On the obverse of all 2018 Gold American Eagle coins you’ll find Liberty. This depiction of Liberty was originally created in 1907 for use on the $20 Gold Double Eagle. Augustus Saint-Gaudens, its creator, intended for the design to appear in high relief, but he would not live to the day when the US Mint was capable of doing that with his beautiful design.

The reverse of the 2018 ¼ oz Gold American Eagle features the family of nesting bald eagles. Created in 1986 by Miley Busiek, this design is found exclusively on the reverse of Gold Eagle coins and none other from the US Mint.

Please feel free to reach out to Silver.com with questions. Our customer service associates are available at 888-989-7223, online using our live chat, or through our email address.