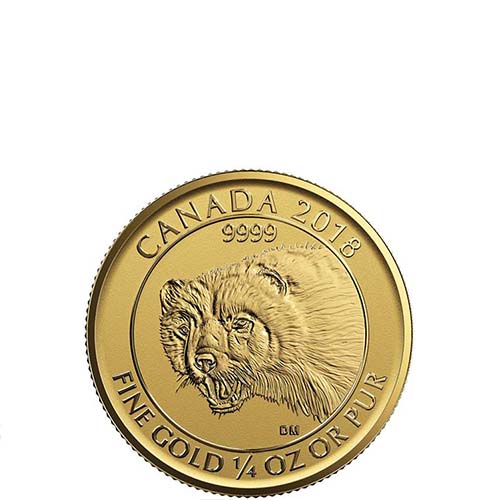 The Animal Portrait Series from the Royal Canadian Mint is only on its second release, but the coins in this series are proving attractive to both investors and collectors. Each new coin release includes .9999 purity, silver or gold, and bears key hallmarks that collectors prefer as well with its new designs and reverse proof striking. Right now, 2018 ¼ oz Gold Canadian Wolverine Reverse Proof Coins are available to purchase online at Silver.com.

All 2018 ¼ oz Gold Canadian Wolverine Reverse Proof Coins are issued as reverse proof specimens. Gold coins with a reverse proof finish include contrasting design aspects and background field, which as the name suggests are the opposite of typical proofs. The design aspects on these coins have the deeply-mirrored, clear appearance while the background field has a strong, frosted finish.

Denis Mayer Jr. creates the designs in the Animal Portrait Series, with the Gold Wolverine Coin representing just the second coin in the issue. Wolverines are stocky, rough, aggressive members of the weasel family that have imposing physical features. The wolverine has a broad, round head with small eyes; short, round ears; and powerful jaws capable of snapping bones and gnawing through frozen flesh and meat.

The reverse of the 2018 ¼ oz Gold Canadian Wolverine Reverse Proof Coin includes Mayer’s design of the wolverine. The fine detailing in the design captures one of the unique features of the wolverine without using colorization, the dark tones of its fur and contrasting lighter highlights of the two stripes that run down its back.

On the obverse of all 2018 Gold Canadian Wolverine Coins includes the right-profile portrait of Queen Elizabeth II. Her Majesty has featured on Canadian coinage since 1952, with this design representing the fourth-generation image. It is the first one of Queen Elizabeth II without a crown and was created in 2003 by Canadian artist Susanna Blunt.

The Royal Canadian Mint issues sovereign currency and official bullion for the nation of Canada. The mint opened in Ottawa in 1908 and was expanded in 1976 with the addition of a facility in Winnipeg.

If you have any questions, please contact Silver.com. Our customer service team is available to you on the phone at 888-989-7223, online using our live chat service, and via our email address.