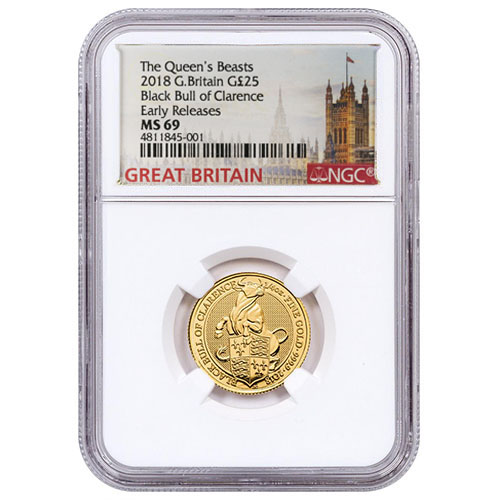 The gold coins for sale in the Queen’s Beast Series from the Royal Mint include a 1 oz option and these ¼ oz coins. From the original issue in 2016, the different designs in the collection have each featured these two gold weights for investors to choose from when buying. Right now, 2018 ¼ oz Gold British Queen’s Beast Black Bull Coins are available to purchase online at Silver.com.

The Early Release label issued along with these coins indicates the arrival of the coins for certification. Each one was received by the NGC within the initial 30-day window following the 2018 release date for Queen’s Beast Black Bull coins set by the Royal Mint.

The Black Bull of Clarence was first adopted by Roger Mortimer, the Duke of Clarence and great-grandfather of the future King Edward IV. Edward IV was the first Yorkist King of England, but not the first to use the Black Bull in his Royal Arms. For more than 200 years, Lancastrian, Yorkist, and Tudor monarchs used the beast in the Royal Arms.

On the reverse of the 2018 ¼ oz Gold British Queen’s Beast Black Bull coin is the massive, powerful bull. It is shown with the Royal Arms first adopted by Richard I and Edward III. The former added the two quadrants of golden Lions of England, while the latter is responsible for the two quadrants of golden lilies of France to support his claim to the throne of France.

The obverse of the Gold British Queen’s Beast Black Bull Coins includes Queen Elizabeth II’s effigy. This portrait of Her Majesty comes from the Royal Mint’s Jody Clark, and represents a fifth-generation depiction during her long reign as Queen of England.

If you have any questions, please feel free to reach out to Silver.com. Our customer service team is available to you at 888-989-7223, on the web using our live chat, and via our email address.