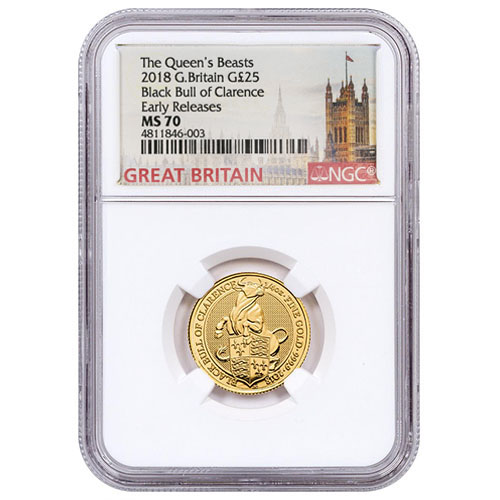 The Queen’s Beast Series of silver and gold bullion coins from the Royal Mint contains 10 designs in total, with a release schedule that launched in 2016 and runs through 2021. The coins are available to both investors and collectors, with a bullion version available alongside a proof option. The 2018 ¼ oz Gold British Queen’s Beast Black Bull Coin is currently available to you for purchase online at Silver.com.

Britain’s kings and queens over hundreds of years have come from different houses or familial lines. The first king from the House of York was Edward IV, who came to power as a result of the Wars of the Roses between 1455 and 1487. Edward IV brought with him a powerful symbol used sparingly by the Lancastrians who ruled before him: the Black Bull of Clarence.

The bull was first used as a symbol of the Duke of Clarence, Edward IV’s great-grandfather Roger Mortimer. It was through his great-grandfather that Edward IV made a claim to the throne, fought with the Lancastrian King Henry VI, and eventually became England’s first Yorkist king.

On the reverse of the 2018 ¼ oz Gold British Queen’s Beast Black Bull Coins is the imposing depiction of the Black Bull. The beast is shown standing on its hind legs behind a quartered Royal Arms shield that has the three golden Lions of England in two quadrants, and the golden lilies of France in the other two quadrants.

The obverse of all 2018 Gold British Queen’s Beast Black Bull Coins features the right-profile portrait of Queen Elizabeth II. Her Majesty has ruled as Queen of England since 1952 when her father George VI died. This is the fifth-generation portrait of Her Majesty and captures the Queen at age 89.

We encourage Silver.com customers to contact us at 888-989-7223 with questions. You can also reach out to us online using our live chat and email address.