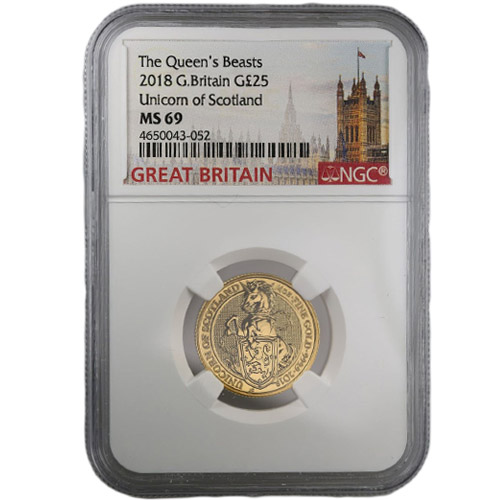 In the Queen’s Beast Series, the fourth release of bullion coins for investors to purchase featured the Unicorn of Scotland. Long heralded by the Scottish people as their national animal and symbol, James I integrated the Unicorn of Scotland into the royal arms of England when he unified the two crowns. Today, the 2018 ¼ oz Gold British Queen’s Beast Unicorn Coin is available to you online at Silver.com.

The Queen’s Beast Series will feature a total of 10 designs by the time it concludes in 2021. Each one of the 10 designs reflects a heraldic beast in British history that has played a significant role in the formation of the United Kingdom and/or proven important to one or more monarchs of the realm.

For the first issue in the series, the Royal Mint opted for the Lion of England. That was followed by the Griffin of Edward III and the Red Dragon of Wales in the lead up to the release of the Unicorn of Scotland. Each of the designs in this series is available to date in silver, gold, and platinum.

All 2018 ¼ oz Gold British Queen’s Beast Unicorn Coins are in near-perfect condition as certified by the NGC. Coins that earn a Mint State 69 certification feature full, original mint luster with a maximum of two minor detracting flaws. These minor flaws are limited in type to minuscule hairlines or contact marks.

On the obverse of the 2018 ¼ oz Gold British Queen’s Beast Unicorn Coin is an effigy of Queen Elizabeth II. Since 1953, Her Majesty has appeared on all British coinage as the monarch of the kingdom. This is the fifth-generation design and was created by Jody Clark in 2015.

Please feel free to reach out to Silver.com with your questions. You can contact us on the phone at 888-989-7223, chat with us live online, or send us an email with your inquiries. Don’t forget to visit our homepage for the latest updates on the price of gold today!