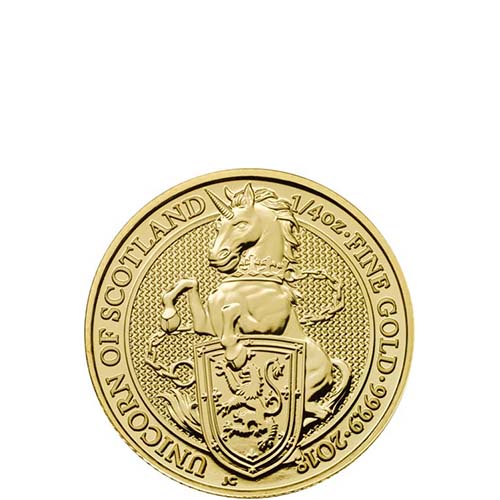 The Unicorn of Scotland makes its debut in the Queen’s Beast bullion coin series as the fourth image to appear. Crafted based upon the statues that featured in Queen Elizabeth II’s coronation ceremony in 1953, the Queen’s Beast coin designs reflect the 10 heraldic creatures that protect the realm. Right now, 2018 ¼ oz Gold British Queen’s Beast Unicorn Coins are available to purchase online at Silver.com.

Each 2018 ¼ oz Gold British Queen’s Beast Unicorn Coin found in this product listing is in BU condition. Coins in BU condition exhibit no signs of wear and tear, though you may find minor flaws such as breaks in the luster, spotted surfaces, and contact marks resulting from the coining process at the mint.

The Royal Mint ships the coins of the Gold British Queen’s Beast ¼ oz range to you in one of three fashions. Individual coin purchases arrive inside of protective plastic flips. For multiples of 25, you’ll receive the coins in mint tubes. The largest batch is a Monster Box of 500 coins, with 20 individual tubes containing 25 coins each.

Scotland’s official national symbol, the unicorn was first adopted into the Scottish coat of arms by William I of Scotland in the 12th century. The Unicorn of Scotland was later adopted in the British Coat of Arms alongside the Lion of England during the unification of the kingdoms at the forming of the United Kingdom.

The obverse of all Gold British Queen’s Beast Unicorn Coins features the right-profile portrait of Queen Elizabeth II. This depiction is the fifth-generation image of Her Majesty, capturing her appearance at age 89. Created in 2015 by Jody Clark, this is the latest design of the Queen during her long reign.

On the reverse of the 2018 ¼ oz Gold British Queen’s Beast Unicorn Coin you’ll find the Unicorn of Scotland. The unicorn is a mythical beast that resembles a horse for all intents and purposes, with a single horn on its head that is said to possess magical powers. Chief among those powers is the ability to heal.

If you have any questions about the Queen’s Beast coins, please contact Silver.com. We’re available to you at 888-989-7223, online using our live chat, and via our email address. Located on our homepage, you’ll find the spot price of silver updated throughout the day!