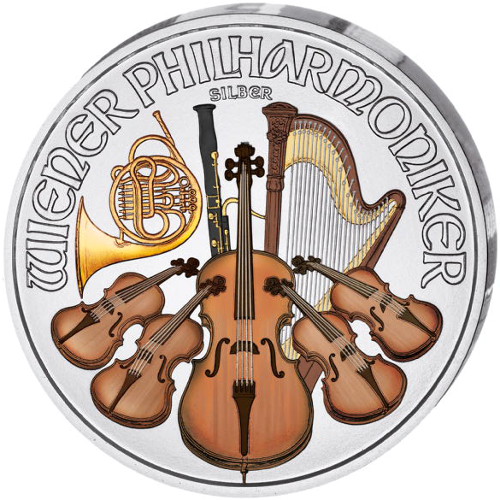 Silver Austrian Philharmonic coins are an annual-issue option from the Austrian Mint. Like other sovereign coin programs, you’ll find cultural icons for the Republic of Austria on both the obverse and reverse sides of the coins. Issued for the first time in 2008, the coins have quickly become a must-have for any investor. Right now, 2018 1 oz Colorized Silver Austrian Philharmonic Coins are available to purchase online at Silver.com.

In 1989, Chief Engraver of the Austrian Mint, Thomas Pesendorfer, created the designs for the Austrian Philharmonic collection. Originally available only as a Gold Philharmonic option, the mint added the Silver Philharmonic coin in 2008 in a 1 oz weight. By 2012, the coin was the best-selling silver bullion coin in Europe.

Today, the 2018 Silver Austrian Philharmonic coinage celebrates its 10th anniversary. The design has remained constant on the obverse and reverse faces of the coin since Pesendorfer’s original Gold Philharmonic designs in 1989. Unique options are always available in this series, including the Colorized Silver Philharmonic coins.

With the addition of lacquered layers of colorization, the designs Pesendorfer created nearly 30 years ago come to life in a brilliant new format. The reverse face of the coin is the only side to feature the colorization, but it brings a new visual to the instruments used by members of the Vienna Philharmonic Orchestra.

Included on the reverse of the 2018 1 oz Colorized Silver Austrian Philharmonic Coin is a collection of musical instruments. The design features a cello in the center, flanked by four violins to its immediate sides. In the background, a Vienna horn, bassoon, and harp are depicted. All of these instruments have colorization that brings the hues of the wood to life in the cello and violins, with a black luster on the bassoon and brilliant gold color to the Vienna horn.

The obverse of all 2018 Silver Austrian Philharmonic Coins features the Golden Music Hall’s pipe organ. Since 1843, the city of Vienna has played host to performances by the nation’s official Philharmonic Orchestra. The Musikverein has long been the home of the orchestra when it performs in the national capital.