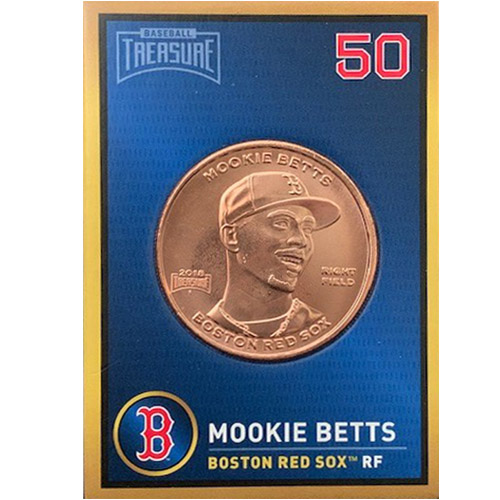 Please be advised that the pictures listed are just an example of what you may receive. We cannot guarantee a certain player will be received or that you will receive various players when purchasing multiple copper rounds. A full list of possible players available can be found below.

Baseball is one of the most popular sports in America. It is played by millions of American children and millions more adults in recreational leagues. Major League Baseball has a deep professional sporting system that has various levels of minor leagues feeding players up to the pro ranks, and it is by far the oldest professional sports league in the nation. The 2018 Baseball Treasure silver and copper rounds celebrate the game’s popularity with player images representing all 30 teams. Now, 1 oz 2018 Copper Baseball Treasure Rounds are available to you for purchase online at Silver.com.

Major League Baseball as it is now constituted was formed in the early 20th century when the separate National League and American League agreed to compete together for a singular championship: the World Series. However, prior to the combination of the two entities, the National League formed in the 1870s and was the leading professional baseball league in the country.

The American League was founded in the early 1900s and would soon-after join together with the National League to form Major League Baseball. Surprisingly, the two leagues were still considered separate entities until the 21st century when both became a single organization under the Major League Baseball umbrella.

On the obverse side the 1 oz 2018 Copper Baseball Treasure Rounds, you will find the portrait of a Major League Baseball player. That player portrait is inside the center ring of the copper round and is accompanied by inscriptions that denote his name, his team, and his position on the field of play.

The reverse face of 1 oz 2018 Copper Baseball Treasure Rounds includes a depiction of that same player in action on the field of play. Also included on this side of the copper round are inscriptions of the player’s stats from the 2017 season.

With each 2018 Baseball Treasure Pack purchase, there is the outside possibility you will receive something other than a copper round inside of these blind packs. The Baseball Collection includes a .999 fine silver coin version of each copper design and a gold coin honoring Aaron Judge and his record 52 homeruns in his rookie season of 2017. These coins are considered chase coins in this pack and are relatively rare. The silver coin occurs an average of 1:432 packs and the gold coin an astonishing 1:21,600 packs. Available designs in the checklist of players include the following individuals:

These 1 oz 2018 Copper Baseball Treasure Rounds are available to you packaged individually inside of baseball card packs. The card is themed just like a player card for Major League Baseball. The card holds the round and the two are packaged together in packaging that doesn’t reveal the player and team until you open the pack. As a result, we cannot guarantee the player and team you receive with your copper round purchase. If you buy multiples, please remember you could receive matching copper rounds with the same player and team.

Silver.com customer service is available at 888-989-7223 to answer your questions. You can also chat with us live online or email us directly with your inquiries.