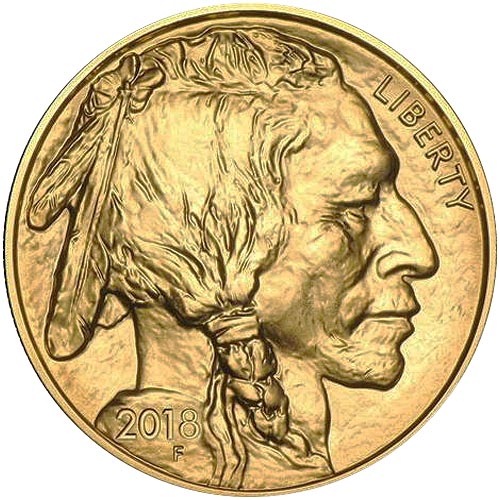 The Gold American Buffalo coin was first released in 2006 and is regularly available in both bullion and proof versions. Occasionally the US Mint has struck different versions of the coin, such as a 2013 Reverse Proof on the 100th anniversary of the Buffalo Nickel design and a 2008 uncirculated coin that was offered in fractional weights of ½ oz, ¼ oz, 1/10 oz.

In terms of mintage, the Gold American Buffalo is roughly on par with the fractional-weights each year in the Gold American Eagle series. The highest mintage in the series’ history came in the first year, with 337,012 coins struck and sold in 2006. The lowest mintage figure came in 2012 at just 100,000 coins, but recent years have seen mintage rising again with a total of 219,500 sold in 2016.

The obverse of all Gold American Buffalo Coins features the right-profile portrait of an American Indian tribal leader. The man’s figure is weathered and shows the passage of time. Engravings include the word “Liberty,” an “F” for Fraser’s last name initial, and the year of issue on the coin.

On the reverse of all 2018 1 oz Gold American Buffalo Coins is the image of Black Diamond. An American bison housed at the Central Park Zoo in New York City during the early 20th century. The designs on both sides of the Gold American Buffalo coin originally appeared on the Buffalo Nickel from 1913 to 1938.

Please don’t hesitate to contact Silver.com if you have questions. You can reach us on the phone at 888-989-7223, chat with us live online, or simply send us an email.