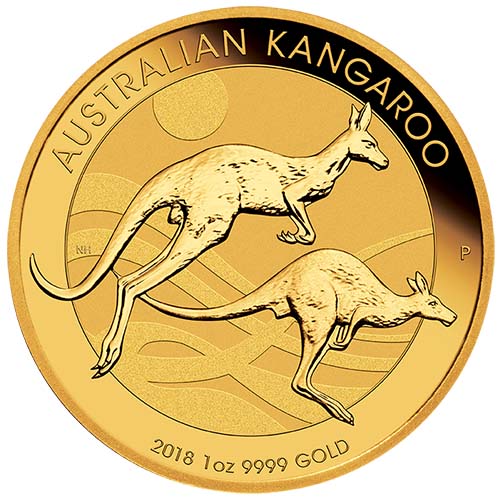 Any quantity available for $147.99 per coin over spot!

When you’re buying gold online, the Gold Australian Kangaroo coin is one product you should not pass up. This investment-grade bullion coin has been offered by the Perth Mint since 1986, with the now-famous kangaroo designs changing every year since the 1990 conversion to a kangaroo design. Right now, 2018 1 oz Gold Australian Kangaroo Coins are available to purchase online at Silver.com.

Each 2018 1 oz Gold Australian Kangaroo Coin listed here today is in BU condition. Coins in this condition exhibit no signs of wear and tear, though you may notice minor flaws as a result of the coining process at the mint. Flaws on BU coins are limited to breaks in the luster, spotted surfaces, and contact marks.

On the obverse side of all 2018 1 oz Gold Australian Kangaroo Coins you’ll find the image of Queen Elizabeth II. The effigy of the Queen is featured on all Australian coinage annually, from bullion releases to circulation currency. This is the fourth-generation image of the Queen created in 1998 by Ian Rank-Broadley.

The reverse of all Gold Australian Kangaroo Coins features an image of two red kangaroos. In this year’s design, the pair are depicted as they hop across the rural settings of the Australian Outback. Engravings include “Australian Kangaroo,” “2018,” and “1 oz 9999 Gold.”

2018 1 oz Gold Australian Kangaroo Coins are the only weight offered this year that have an unlimited mintage figure. As such, the Perth Mint will continue coining the 2018 1 oz gold coin to meet investor demand until December 2018, the end of the calendar year of issue featured on the coins.

Perth Mint is not the official sovereign mint of Australia, a title held by the Royal Australian Mint in Canberra. Rather, it is the oldest operating facility in the country and formerly part of the Royal Mint system during British colonial control. Since 1970, the mint has been owned by the state government of Western Australia.

If you have questions, please contact Silver.com at 888-989-7223. You can also connect with us online through our live chat and email features.