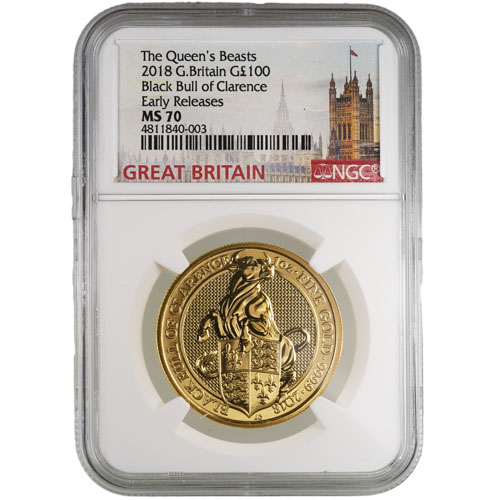 The Queen’s Beast Series from the Royal Mint catalogs the 10 most important heraldic beasts in the history of England and the Royal Arms. Each creature was chosen for this series because of its presence during the coronation ceremony of Queen Elizabeth II in 1953 at Westminster Abbey in the form of wooden statues. Right now, 2018 1 oz Gold British Queen’s Beast Black Bull Coins are available to purchase online at Silver.com.

Each of the 2018 1 oz Gold British Queen’s Beast Black Bull coins listed here today is a perfect specimen as graded by the NGC. Gold bullion coins with a Mint State 70 certification exhibit full, original mint luster and present with no detracting flaws anywhere on the coin’s surface areas. The included Early Release label identifies the coins as those which arrived for grading within 30 days of the 2018 release date set by the Royal Mint.

The Black Bull was first used as a private symbol for the Duke of Clarence, Roger Mortimer. It was through Mortimer’s great-grandson, Edward III, that the Black Bull of Clarence would come to be associated with the Royal Arms. Edward III used his great-grandfather’s lineage as a claim to the throne of England, reigning for a total of 21 years over two separate periods on the throne.

On the reverse of 2018 1 oz Gold British Queen’s Beast Black Bull coins you’ll find the Royal Arms of Edward III together with the Black Bull of Clarence behind the shield. Upon the shield are four quadrants; two with the golden lilies of France and two with the three golden lions of England. This shield and the Black Bull were used by Edward III, his brother Richard III, and other Lancastrian, Yorkist, and Tudor monarchs over 200 years.

The obverse of the 2018 Gold British Queen’s Beast Coins features the right-profile portrait of Her Majesty, Queen Elizabeth II. The Queen has been on British coinage now since 1953, with this design representing a fifth-generation depiction of England’s longest-ruling monarch.

If you have any questions, please feel free to contact Silver.com. Our customer service team is available at 888-989-7223, online through our live chat, and via our email address.