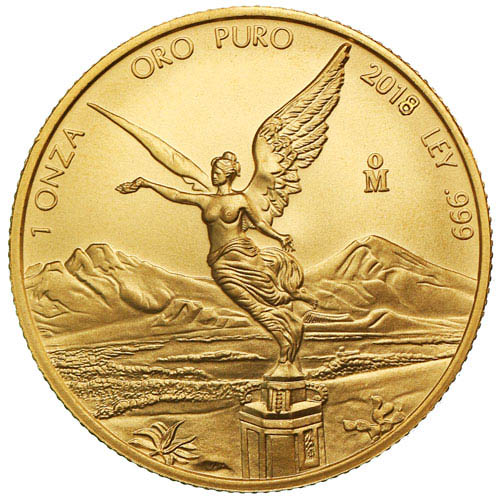 The 1 oz Gold Libertad is the primary issue of the Gold Mexican Libertad Series. The coin was among the first three options available when the series debuted in 1981. That 1981 debut was, however, short lived as the coin program went on hiatus for another decade until 1991. When the coins returned in 1991, there was a new 1/10 oz and 1/20 oz option available as well.

On the obverse of all 2018 1 oz Gold Mexican Libertad Coins you’ll find an effigy of Winged Victory. She is depicted here as found on the top of the Mexican Independence Victory Column. Her figure stands atop that column at 22-ft in height and was placed there as part of the centennial independence celebrations in 1921.

The reverse of the 1 oz Gold Mexican Libertad coin features not only the modern coat of arms for the nation in the center, but also 10 historic versions of the design that date back through more than a century of Mexican history. The seal is based upon various historic versions used by regional empires dating back to the Aztecs.

Your 2018 1 oz Gold Mexican Libertad Coin purchased here today is in BU condition. Coins in this condition have no indications of wear and tear from handling. There is, however, the possibility of minor flaws ranging from breaks in the luster and spotted surfaces to contact marks.

We encourage Silver.com customers to call us when they buy gold. We’re available at 888-989-7223, or connect with us online using our live chat and email options.