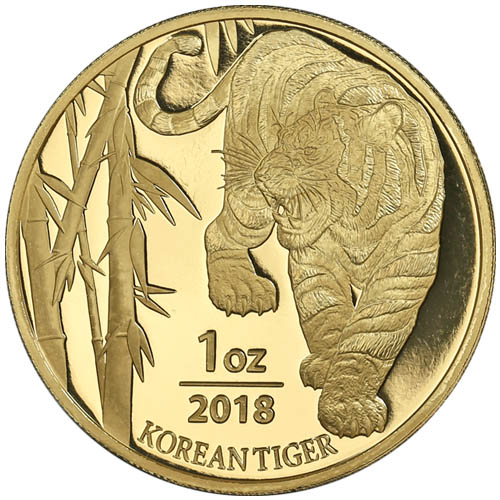 The Korean Tiger Series of coins from KOMSCO is available annually and has been issued since 2016. The coins bear the image of a Siberian, or Amur, tiger on the obverse side with an artistic rendition of the Korean peninsula on the reverse face of the coin. Right now, 2018 1 oz Gold South Korean Tiger Coins are available to purchase online at Silver.com.

Each of the 2018 1 oz Gold South Korean Tiger Coins available for purchase today at Silver.com comes with a commemorative display box from KOMSCO. The coins are individually encapsulated and housed within a black-velvet lined case and also feature a Certificate of Authenticity from KOMSCO.

The Korean Tiger Series from KOMSCO was first released in 2016 and features new designs of the Siberian tiger on the obverse. Also known as the Amur tiger throughout China and the Korean peninsula, the largest member of the tiger species once had a range that stretched from northeastern Russia down through China and to the very southern tip of the Korean peninsula. Today, however, there are just 400 Siberian tigers known to exist in the wild, with most of these animals living in the Far Eastern portions of Russia.

On the obverse side of 2018 1 oz Gold South Korean Tiger Coins is the image of a massive and powerful tiger stalking its prey. The beast lurks behind a wall of bamboo bushes and carefully prowls for an unsuspecting victim. Tigers reached as far as Jindo Island in the South Jeolla Province of South Korea and only recently in human history disappeared. The last confirmed sighting of the beasts, by hunters, in this region came in 1922 when a tiger was killed by a group of hunters.

The reverse of 2018 Gold South Korean Tigers includes a very beautiful rendition of the Korean peninsula. This artistic vision uses the characters of the Korean language to form the shape of the peninsula and ignores political boundaries to present the image of a peninsula culturally and historically linked together as one.

If you have any questions about these coins, please don’t hesitate to ask. Silver.com customer service is available to you at 888-989-7223, online using our live chat, and via our email address. Don’t forget to check today’s gold price as you shop using our website’s tracker!