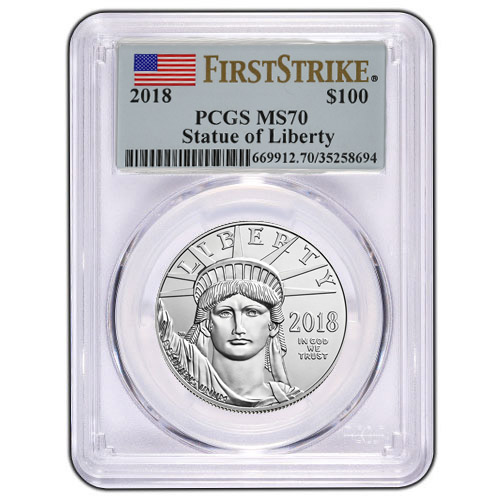 The Platinum American Eagle coin from the United States Mint is the nation’s most unique annual-release bullion coin. While the gold and silver versions of the American Eagle feature the same, historic designs each year, the US Mint rotates the reverse designs used on the proof version of the Platinum Eagle. Though the bullion coins have the same design, the use of rotating designs on the reverse each year makes the Platinum Eagle the only coin of its kind from the US Mint to change imagery. The 2018 1 oz Platinum American Eagle Coin is currently available to you for purchase online at Silver.com in perfect condition!

These Platinum Eagle coins in bullion feature a design from John Mercanti on the coin’s obverse. Mercanti designed the reverse of the Silver American Eagle coin in 1986, and near the end of his career with the US Mint served as the Chief Engraver from 2006 until his retirement in 2010. He was just the 12th person to hold the role of Chief Engraver of the United States Mint.

On the obverse of the 2018 1 oz Platinum American Eagle Coin is the design of Liberty that Mercanti created. Based upon the Statue of Liberty, her figure is captured here from the neck up. It focuses on Liberty’s face as she gazes into the future and you can see a portion of her hand that is held aloft with a guiding torch in its grip.

The reverse of Platinum American Eagle bullion coins bears the same design every year. Thomas D. Rogers, a former US Mint engraver and artist, created this depiction of an eagle in flight. It is featured flying over the continent with its wings spread wide as it glides above gazing over the horizon on its powerful flight.

Your purchase of a 2018 1 oz Platinum American Eagle in this listing provides you with a coin certified in perfect condition by the PCGS. Coins with this grade showcase full, original mint luster and lack all possible detracting flaws. First Strike coins include a special FS label that notes their arrival with the PCGS for certification within the initial 30 days of their 2018 release from the United States Mint.

We encourage all Silver.com customers to contact us with questions at 888-989-7223. You can also reach our customer service team online using our live chat service and email address.