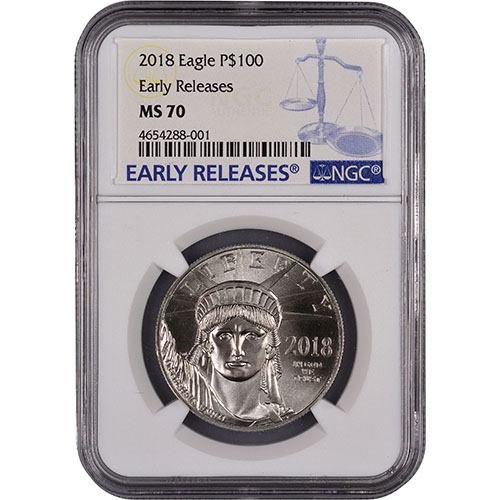 Designs on the Platinum American Eagle coin come from two of the US Mint’s best engravers in recent history. Thomas D. Rogers designed the image of the eagle soaring above the continent that features on the reverse of the coin. Rogers was an engraver and sculptor with the US Mint who created images for various coins.

His reverse image of the eagle soaring across America remains the only design in the Platinum Eagle’s history to feature on both the bullion and proof version of the coin. The proof Platinum Eagles have a new reverse design each year, and the 1997 issue was the only time the design of the obverse and reverse were the same.

John Mercanti is a native of Philadelphia, PA and got his start as a sculptor-engraver with the US Mint at its Philadelphia Mint location. Mercanti designed the heraldic eagle on the Silver Eagle’s reverse as well as Liberty on the obverse of the Platinum Eagle. He would go on to serve as the 12th Chief Engraver of the United States Mint from 2006 to his retirement in 2010.

The 2018 1 oz Platinum American Eagle Coins listed here are perfect specimens according to the NGC. Coins with a Mint State 70 grade have full, original mint luster and lack all detracting flaws. The included Early Release label denotes these coins were received for grading within 30 days of their 2018 issue date by the US Mint.

We encourage Silver.com customers to contact us with questions at 888-989-7223. You can also reach out to us online through our live chat and email address. Platinum prices are also listed on our site at all times.