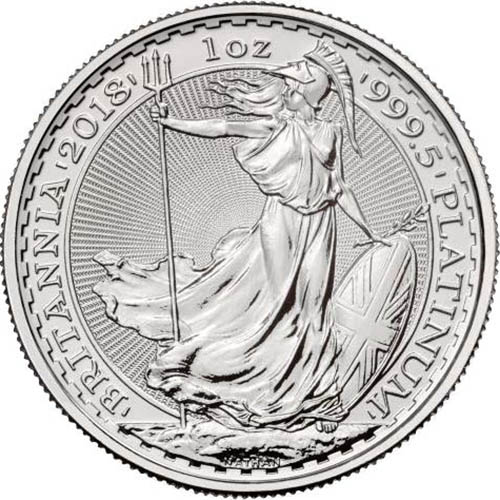 As platinum grows in popularity and demand in the 21st century, mints are responding by introducing new platinum coins or expanding existing programs. The Royal Mint’s Britannia series debuted in 1987 and has expanded only once before, in 1997. Today, the all-new 2018 1 oz Platinum British Britannia Coin is available to you online at Silver.com.

As a new release for 2018, the Royal Mint introduces the Platinum British Britannia Coin. This one ounce platinum coin is the first of its kind in the Britannia Series. The addition of a Platinum Britannia coin in the 31st year of the series marks the first expansion of the program since 1997 when the Silver Britannia debuted. The series started in 1987 with the Gold Britannia issue. All coins in the series feature the Queen’s effigy on the obverse, and Philip Nathan’s depiction of Britannia on the reverse.

All 2018 1 oz Platinum British Britannia Coins listed here with Silver.com are in BU condition. Coins in this condition have no signs of wear and tear, though minor production flaws are a possibility. The potential minor flaws range from breaks in the luster and spotted surfaces to contact marks.

Platinum Britannia coins have a very limited initial mintage of 5,000 coins in total. Depending on the popularity of the series, the Royal Mint is ready to allocate an additional 5,000 coins for the mintage to meet demand.

The obverse of all Platinum British Britannia Coins includes the fifth-generation portrait of Queen Elizabeth II. Britain’s longest-reigning monarch, and currently the longest reigning in the world, Her Majesty is featured in right-profile relief. This portrait was created in 2015 by Royal Mint engraver Jody Clark, who at 33 years old became the youngest mint engraver to complete the Queen’s effigy.

Please don’t hesitate to reach out to Silver.com with your questions. You can call our customer service team on the phone at 888-989-7223, chat with us live online, or simply send us an email with your inquiries.