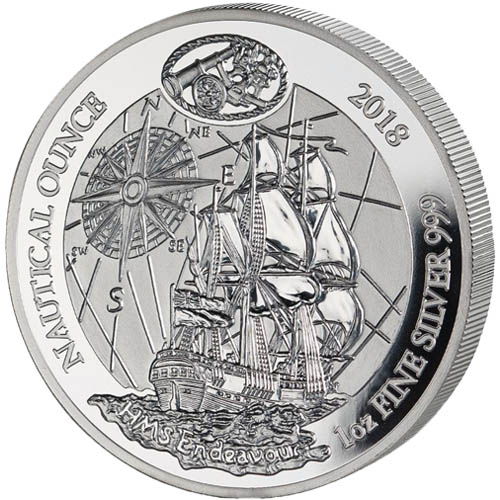 The Rwandan Nautical Ounce Coins debuted in 2017 with the release of the Santa Maria coin. Each one of the ships featured on the obverse field of the coins in this collection altered the course of human history in one way or another. The second coin in the series, the HMS Endeavor, celebrates the European discovery of New Zealand’s coast and the east coast of Australia. Today, 2018 1 oz Proof Silver Rwandan Endeavor Nautical Ounce Coins are available to you online at Silver.com.

The HMS Endeavor was launched from its home port of Plymouth, England, in June 1764 as the Earl of Pembroke. For the first four years of its existence, the ship operated under that name before being purchased by the Royal Navy. The Royal Navy commissioned the ship as a research vessel and renamed it the HMS Endeavor. Though it would meet a rather lowly end 14 years later, the HMS Endeavor would make a name for itself in the interim.

All of the 2018 1 oz Proof Silver Rwandan Endeavor Nautical Ounce Coins in this product listing are available to you with proof visuals. The coins have frosted design elements and mirrored background fields. Each coin is individually packaged inside of a protective capsule and comes with a Certificate of Authenticity.

HMS Endeavor is depicted on the obverse face of the 2018 Proof Silver Rwandan Endeavor Nautical Ounce Coins. The HMS Endeavor’s most prominent voyage was under the command of Lieutenant James Cook when it departed England in the summer of 1768. Lt. Cook sailed around Cape Horn at the southern tip of the South American continent and first made a major stop in Tahiti. The ship would bounce along the western islands of Tahiti before departing for New Zealand. After anchoring off the coast of New Zealand, the HMS Endeavor became the first ship ever to anchor off the east coast of Australia. Lt. Cook went ashore as the ship was anchored off the east coast of Australia.

The Rwandan coat of arms is depicted on the reverse field of 2018 1 oz Proof Silver Rwandan Endeavor Nautical Ounce Coins. The official seal of Rwanda includes a traditional clay pot at the center, coffee and sorghum on either side of the pot, and tribal warrior shields flanking the entire design.

Please contact Silver.com with any questions you have about this silver for sale. We are available to you at 888-989-7223, online using our live chat, and via our email address.