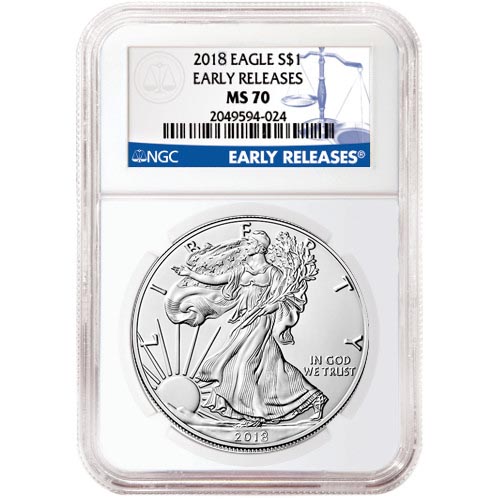 The Silver American Eagle coin from the United States Mint is the top-selling bullion coin in the world. From 2008 to 2015, the Silver Eagle faced such intense demand that it set new sales records in seven years, with a run of four-straight years followed by a run of three straight years of increases in that time. Today, 2018 1 oz Silver American Eagle Coins are available in perfect condition at Silver.com.

The 2018 1 oz Silver American Eagle Coin in this listing is available with a perfect grade from the NGC. A Mint State 70 coin feature full, original mint luster and bears no detracting flaws on its surface areas.

On the obverse of Silver American Eagle Coins is the image of Walking Liberty. Her image is depicted in full-figure relief as she walks from right to left across the coin’s design field. Her right arm is held outstretched toward the setting sun as she walks toward the horizon, the American flag is draped over her shoulders as she does so.

Adolph A. Weinman created the image of Walking Liberty in 1916. It was chosen during a US Mint artistic competition in the early 20th century as the US Mint sought to revitalize the imagery of all American coinage. Walking Liberty appeared on the nation’s half-dollar coin from 1916 to 1947, when it was replaced by an effigy of Benjamin Franklin.

Please don’t hesitate to contact Silver.com with questions. You can call us on the phone at 888-989-7223, connect with us online through our live chat, or simply send us an email with your inquiries.