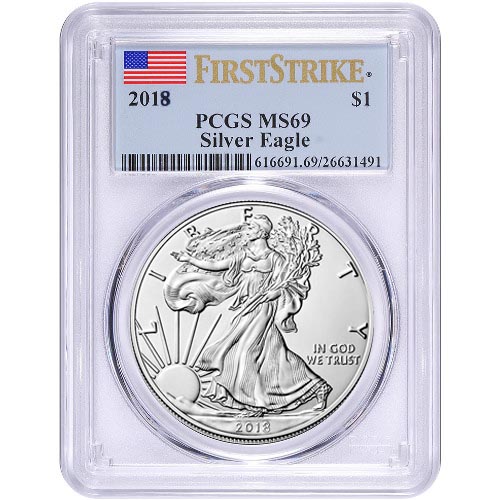 When you’re buying silver, there are a number of factors to consider. The condition of the coin and its metal purity are often at the top of the list. The Silver American Eagle coin has silver purity and content backed by the US government, and is often available with certification from the PCGS. Today, 2018 1 oz Silver American Eagle Coins are to you online at Silver.com in near-perfect condition.

All of the 2018 1 oz Silver American Eagle Coins are available to purchase today in near-perfect condition as graded by the PCGS. The coins in the listing are graded Mint State 69, which indicates a coin with full, original mint luster and a maximum of two minor detracting flaws. Those flaws are limited to minuscule hairlines or contact marks found outside the primary focal areas.

On the obverse is Walking Liberty from Adolph A. Weinman. The image of Walking Liberty depicts the full figure of Liberty as she walks, holding oaken and olive branches in her left hand and the American flag over her shoulders. Liberty is shown walking toward the setting sun, seeking a consistently brighter future.

The reverse of 2018 1 oz Silver American Eagle Coin is offered with a design of the heraldic eagle of the United States. It first appeared on the first American coins struck in 1794 at the Philadelphia Mint. This design was revamped by John Mercanti and reflects the American eagle behind the national crest, with 13 stars above its head to represent the original American colonies.

All Silver Eagles are produced by the United States Mint. The San Francisco Mint, Philadelphia Mint, and the West Point Mint have contributed to the production of the coins since their 1986 release.

Please don’t hesitate to contact Silver.com with questions. Our customer service team is available to you at 888-989-7223, online through our live chat feature, and via our email address.