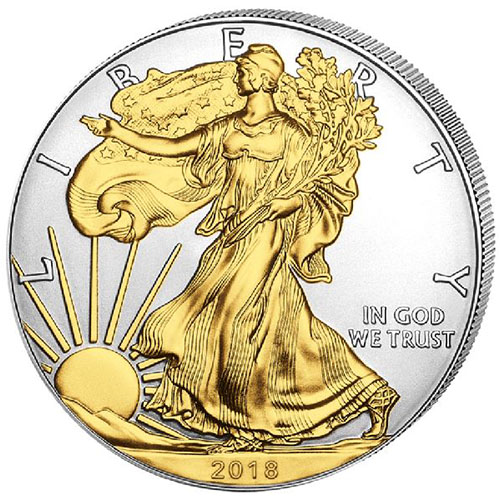 With more than 100 million coins sold in a span stretching from 2014 to 2016, the Silver American Eagle outsells all other silver bullion coins annually by a wide margin. With iconic images of Americana, and a weight and purity backed by the federal government of the United States, the Silver Eagle is a massively popular coin. Right now, 2018 1 oz Silver American Eagle Coins are available to purchase online at Silver.com.

Each of the 2018 1 oz Silver American Eagle Coins available to you in this listing features a beautiful finish. The traditional silver bullion issue of the Silver Eagle is found here today with a thin layer of 24-karat gold. Though that layer of gold does not add to the metallic value of the coin as an investment piece, it does enhance the visual brilliance of the coin as a collectible piece.

Silver American Eagle Coins debuted in 1986 along with the Gold American Eagle from the United States Mint as the new, official bullion coins of the US. The coins feature unique images of Liberty, with each program taking a different historic vision of Liberty and bringing it to life on an investment-grade blank.

On the obverse of the 2018 1 oz Silver American Eagle Coin you’ll find Walking Liberty. Created in 1916 by Adolph A. Weinman, this depiction of Liberty appeared on the nation’s half-dollar coin from 1916 to 1947. It features Liberty as she strides from right to left across the coin’s surface, wearing the American flag around her shoulders as she marches continuously toward the sun on the horizon as a sign of forward progress toward a brighter future.

It is this side of the coin that bears the 24-karat gold layer of gilded finish. It is the image of Liberty, draped in the flag, and the ground, sun, and horizon which have the gilded finish. The background remains a stunning silver, with engravings of “Liberty” and “In God We Trust” featured as well.

The reverse of the Silver American Eagle coin features the heraldic eagle of the United States. Redesigned in 1986 by John Mercanti, this depiction has a modern national shield on the breast of the American bald eagle. Mercanti would go on to serve as the 12th Chief Engraver of the United States Mint from 2006 to 2010, when he retired.

If you have any questions, please contact Silver.com. Our customer service team is available at 888-989-7223, online using our live chat, and via email.