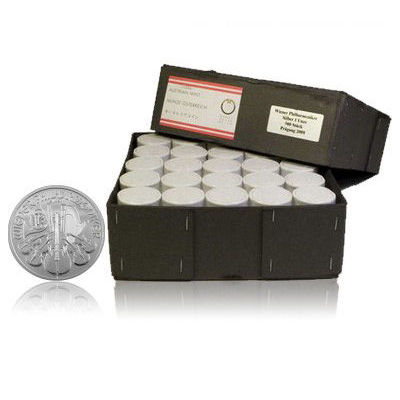 Like many other bullion coin series, the Austrian Philharmonics feature the same design on the obverse and reverse each year. All three versions of the coin have this same design, which was created back in 1989 by Thomas Pesendorfer, the Chief Engraver of the Austrian Mint.

In this Silver.com listing you have the opportunity to purchase a total of 500 Troy oz of .999 fine silver. The 2018 Silver Austrian Philharmonic Coin is available to you in a Monster Box that includes 25 tubes in total, with each one containing 20 individual coins from the 2018 release of the Silver Philharmonic.

On the obverse of all Silver Austrian Philharmonic Coins is the design of the Great Organ. This organ is used during philharmonic performances and is found inside of the Golden Hall, which is known as the Musikverein. The Golden Hall is located in the Innere Stadt borough of Vienna, which is the national capital of Austria.

All 2018 Silver Austrian Philharmonic Coins in this Monster Box issue are in BU condition. Coins in this condition have no signs of wear and tear, but there are potential flaws present on these coins as a result of striking the dies. These minor flaws consist of breaks in the luster, spotted surfaces, and contact marks.

The Austrian Mint was founded in 1194 by Duke Leopold V of Austria. He was paid 15 t onnes of silver by England’s Richard the Lionheart as a bounty for release from prison on his way back from the crusades, and Leopold V used that money to found the Austrian Mint.

We encourage Silver.com customers to call us at 888-989-7223 with questions. You can also reach out to us online through our live chat and email address. Don’t forget to research silver prices on our homepage when buying!