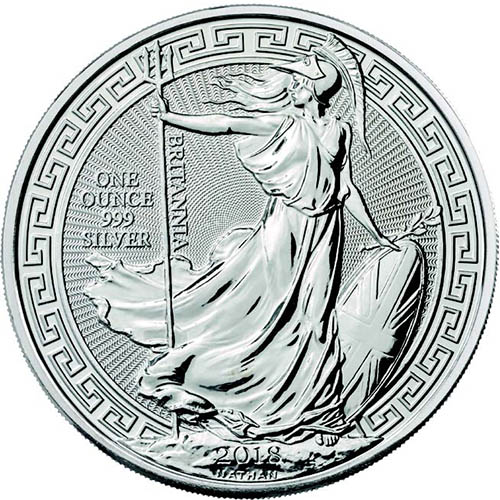 The Silver Britannia is recognized around the globe as a firm symbol of financial stability. Issued by the Royal Mint, this coin bears the most iconic of British coin designs and is known as the official bullion coin of the country. The 2018 1 oz Silver British Oriental Border Britannia Coin is now available to you online at Silver.com.

Britannia, as a word and a symbol, has been with the British people since the Roman Empire roamed the British Isles. When the Romans finally conquered Britain in the early 1st century, the new province of Rome was known as Britannia.

In more recent history, Britannia became an official symbol of Britain when the crowns of Britain and Scotland were merged in union during the early 18th century. The first coins struck for this new union featured the image of Britannia. Today, she appears on the official bullion coin of the nation in both gold and silver releases.

For this special, limited-edition release by the Royal Mint, the 2018 1 oz Silver British Britannia coin features an oriental border pattern on the coin’s reverse face. This design stems from the British Trade Dollar used in the Far East during the latter half of the 19th century.

The reverse of the 2018 Silver British Britannia Coin includes Philip Nathan’s design of Britannia. On this face of the coin you’ll find an engraving of the weight, purity, and metal content of the coin near Britannia’s trident, while the word “Britannia” is featured vertically along the shaft of the trident. Below her figure, the year of issue appears just above the word “Nathan,” honoring the designer.

On the obverse of all 2018 1 oz Silver British Britannia Coins is the effigy of Queen Elizabeth II. Her Majesty appears on the obverse of all British coinage, and has since she ascended the throne in 1952. This is the latest design, fifth overall, of the Queen’s figure and was created in 2015 by Jody Clark.

The 2018 1 oz Silver British Oriental Border Britannia Coins listed here are in BU condition. Coins in this condition show no signs of wear and tear, but minor flaws from the striking process are possible. Those flaws include breaks in the luster, spotted surfaces, and contact marks.

We encourage all Silver.com customers to reach out to us with questions at 888-989-7223. You can also connect with us online through our live web chat service or email address.