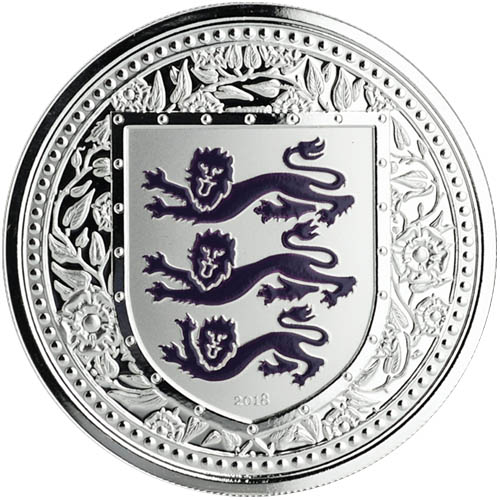 The new British Silver Royal Arms of England collection of silver coins for sale are struck by the Scottsdale Mint and issued on behalf of Gibraltar. Scottsdale Mint is a private American mint and Gibraltar is a British Overseas Territory within the realm since 1704. The 2018 1 oz British Silver Royal Arms of England Gibraltar Reverse Proof Coin with purple colorization is available to you for online purchase today at Silver.com.

The Royal Arms of England as depicted on these new silver coins for Gibraltar is the most iconic design in the history of Britain’s royal arms. Prior to the 12th century, depictions of the Royal Arms of England varied to include either one or two lions. It was the reign of King Richard I, the second Plantagenet King of England, that brought about this first official design.

Richard the Lionheart, as he was known, designed this seal with three lions stacked vertically on the shield. Each one stands in the passant guardant pose with the right forepaw raised and the head turned toward the viewer. Richard I’s Royal Arms of England became synonymous with British monarchs and went unchanged for nearly 200 years.

On the reverse of 2018 1 oz British Silver Royal Arms of England Gibraltar Reverse Proof Coins is the official shield of Richard I. The Three Lions shield includes a purple colorization on the lions in this release and features a background of vines and roses. The significance of the roses notes the early House of Plantagenet rule with its end in 1485.

The obverse of 2018 British Silver Royal Arms of England Gibraltar coins includes Queen Elizabeth II’s effigy. This is the third-generation effigy from British coinage created in 1984 by Raphael Maklouf.

These 2018 1 oz British Silver Royal Arms of England Gibraltar Reverse Proof Coins ship in protective plastic capsules housed in black-felt cases. The coin and case are shipped in a shipping sleeve with the Royal Arms of England. Each coin comes with a Certificate of Authenticity and reverse proof finish. Reverse proof coins have deeply-mirrored designs and frosted backgrounds.