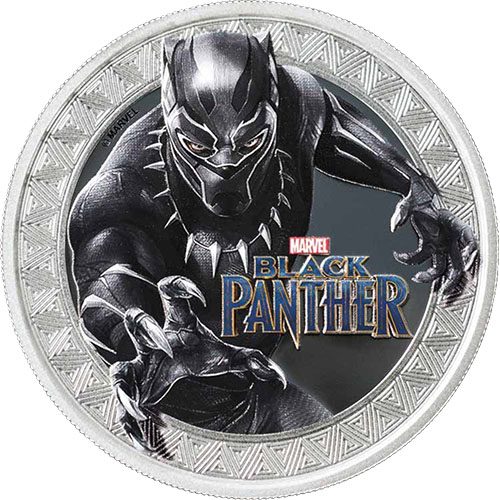 The characters from the Marvel Cinematic Universe have been doing more than lighting up the big screen in recent years. These characters have also featured on countless silver coins available to investors and collectors. The latest superhero to take the world by storm is Black Panther. The 2018 1 oz Silver Tuvalu Black Panther Coin is available to you currently for purchase online at Silver.com.

Black Panther first gained popularity in the Marvel Cinematic Universe with an appearance in the 2016 release of Captain America: Civil War. His character proved so popular that Marvel moved ahead with a feature film focusing solely on Black Panther as he struggled to maintain control over his fictional African kingdom of Wakanda.

In the 2018 film, T’Challa returns home to his kingdom in Wakanda to find that his sovereignty is being challenged by a new foe. Though no one realizes it at first, this conflict will have global implications. T’Challa is the real name of the man who fights injustice and evil in the character of Black Panther.

On the reverse of the 2018 1 oz Silver Tuvalu Black Panther Coin is the image of the character from the recent feature film. In both Captain America: Civil War and the subsequent Black Panther release, the character of T’Challa is played by actor Chadwick Boseman. The primary design of Black Panther found on this face of the coin is colorized to depict his figure accurately.

The obverse of the 2018 Silver Tuvalu Black Panther Coins includes the depiction of Queen Elizabeth II. Her Majesty is featured here in a right-profile portrait which was created in 1998 by Ian Rank-Broadley. This design originated at the Royal Mint of England and was used on British coinage through the end of the 2015 issue year for British coinage.

These 2018 1 oz Silver Tuvalu Black Panther Coins are available to you in beautiful, clear acrylic cases. The case enables you to see both design faces of the coin at the same time and it is housed within a commemorative box that includes a Certificate of Authenticity from the Perth Mint.

We encourage Silver.com customers to contact us with questions. You can reach out to us on the phone at 888-989-7223, online using our live chat, and by sending us an email with your inquiries.