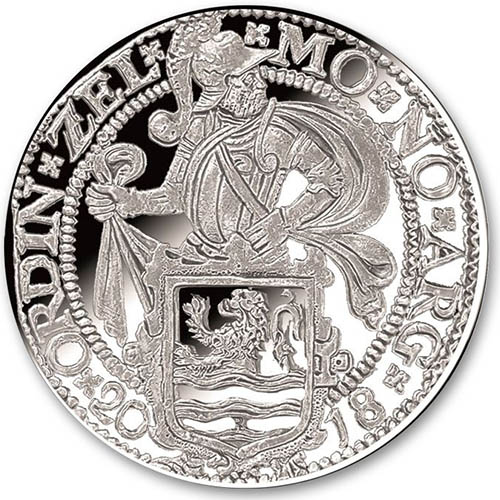 One of the most widely circulated trade currencies of the Renaissance era was the lion daalder of the Province of Holland. As Holland, and later the Netherlands, expanded its global trade empire, the Royal Dutch Mint introduced a silver coin design for the lion daalder that reemerged on its 400th anniversary in 2017. Today, 2018 1 oz Silver Netherlands Lion Dollar Coins are available to you online at Silver.com.

The first lion daalder was issued by the Utrecht Mint in 1575 on behalf of the Province of Holland. The coins were meant to increase trade between posts and outposts from the shores of Holland in Europe to the Americas, Asia, Africa, and even Australia. By the late 1700s, the lion daalder was prominent around the globe and even inspired the name of the fiat currency of the new United States, with daalder translated as dollar for the new American currency.

All of the 2018 1 oz Silver Netherlands Lion Dollar coins in this listing are the second issues of the restrike of the lion daalder coinage. The silver coins for sale today are available housed in individual capsules and shipped in commemorative boxes courtesy of the Royal Dutch Mint. The mint issued the lion daalder design again for the first time in 2017, striking gold and silver coins to commemorate the 400th anniversary of the 1617 issuance of this particular design.

On the obverse of the new 2018 1 oz Silver Netherlands Lion Dollar Coin, you’ll find the image of an Armored Knight. The knight has a shield in front of him that bears the rampant lion from the Dutch coat of arms. Engravings on this face translate to read “Silver Money of the Province of the Netherlands,” with a “TRA” mark representing Utrecht as the original minting location.

The reverse of the 2018 Silver Lion Dollar Coins features a larger image of the rampant lion of the Netherlands, along with Zeeland Waves. Zeeland is the westernmost and least populous province of the Netherlands.

Please feel free to reach out to Silver.com with your questions concerning the purchase of these coins. You can call us at 888-989-7223, chat with us live online, or simply send us an email with your inquiries.