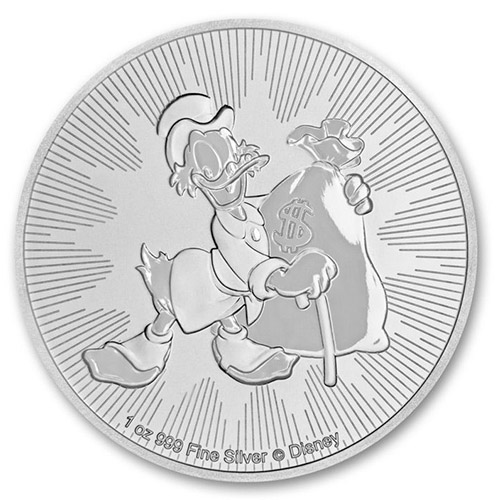 For those familiar with the primary characters in the Disney universe, Scrooge McDuck might still be a stranger. The maternal uncle of Donald Duck, Scrooge was originally portrayed in a manner befitting his namesake character from the novel A Christmas Carol; Ebenezer Scrooge. Modern depictions paint Scrooge McDuck in a happier light, such as the one on this Disney coin from the New Zealand Mint. Right now, 2018 1 oz Silver Niue Disney Scrooge McDuck Coins are available to purchase online at Silver.com.

Scrooge McDuck was originally introduced into the Disney character lineup in 1947 by Carl Banks. He was named after the crotchety, tight-fisted Ebenezer Scrooge from A Christmas Carol. Original depictions of Scrooge McDuck paint him in a different light than most are probably familiar with today. He was a grumpy old Scottish billionaire who wasn’t ever fun to be around.

On the reverse of 2018 1 oz Silver Niue Disney Scrooge McDuck Coins is the more modern depiction of his character. As featured in Duck Tales, he wears a top hat, frock coat, and pince-nez glasses at the end of his beak. He also typically wears spats on his flippers. In a nod to his vast wealth, Scrooge is featured here with a giant money bag in one hand and his cane in the other.

The obverse of all 2018 Silver Niue Disney Scrooge McDuck Coins features Queen Elizabeth II. Her Majesty is shown on the obverse of all commonwealth coins, and this fourth-generation design was created in 1998 by Ian Rank-Broadley for the Royal Mint of England.

The New Zealand Mint is a private minting facility located in Auckland and is not associated with the government of New Zealand. The facility was one of the first in the world to adopt .9999 gold purity for its coins and regularly strikes .999 fine silver coins as well.

If you have any questions as you shop our silver for sale, don’t hesitate to contact Silver.com. Our customer service team is available at 888-989-7223, online using our live chat, and via our email address.