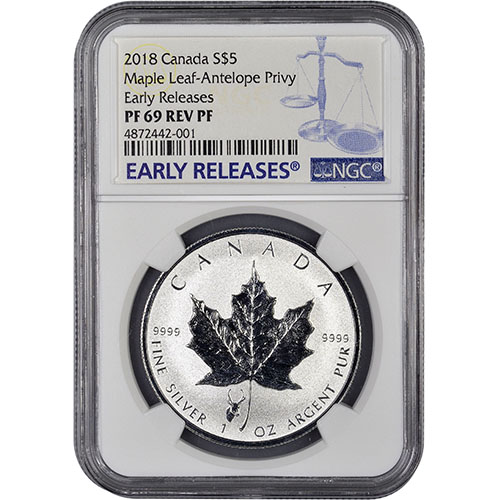 The Wild Canada Series is a collection of Silver Canadian Maple Leaf coins finished in reverse proof with a privy mark from each of the species depicted in the Canadian Wildlife Series. Each animal appears in the Wild Canada Series in the same order it featured in the Canadian Wildlife Series. Right now, 2018 1 oz Pronghorn Antelope Privy Silver Canadian Maple Leaf Reverse Proof Coins are available to purchase online at Silver.com.

The Wild Canada Series of coins are reverse proof. This type of coin has strong, frosted background fields with deeply-mirrored, clear design elements. The Early Release label that comes with these coins indicates that each coin was received by the NGC for certification within the first 30 days of initial release from the Royal Canadian Mint.

On the reverse of 2018 1 oz Pronghorn Antelope Privy Silver Canadian Maple Leaf Reverse Proof Coins is the sugar maple leaf design created in 1979 by Walter Ott for the Royal Canadian Mint. Included on this face of the coin is a privy mark representing the pronghorn antelope. The Canadian Wildlife Series originally featured the antelope fifth in the series and it appears fifth again in the Wild Canada Series.

The obverse of 2018 Pronghorn Antelope Privy Silver Maple Leaf Coins features a right-profile portrait of Queen Elizabeth II. Her Majesty features here in a fourth-generation design created by Susanna Blunt in 2003. This image is the first since that of her father, King George VI, to depict a monarch without a crown.

Founded in 1908, the Royal Canadian Mint is the official sovereign mint of Canada. It originally consisted only of the Ottawa Mint facility in the federal capital, but also has a Winnipeg Mint as of the 1970s that is responsible for the production of all circulation currency.

If you have any questions, please feel free to contact Silver.com. You can call us at 888-989-7223, chat with us live online, or send us an email. Don’t forget to track silver prices using our price of silver charts online!

Images shown are examples only. Actual item appearance is subject to change, but will always correlate with title and descrip