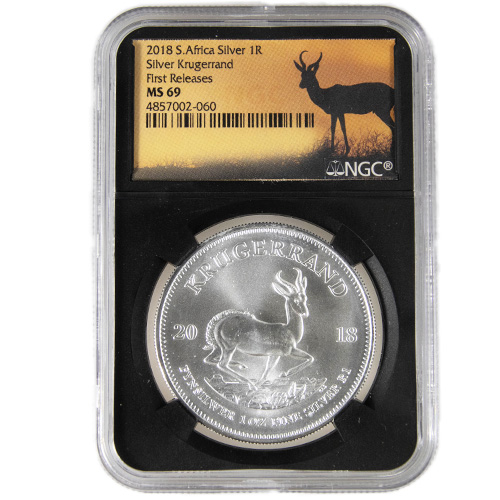 All of the 2018 1 oz Silver South African Krugerrands in this listing come to you in near-perfect condition. Mint State 69 coins have full, original mint luster with a maximum of two minor detractions. Examples of these flaws include only minuscule contact marks or hairlines found only outside of the primary focal points of the coin. The First Release designation is for coins the NGC received for certification within 30 days of release from the mint.

On the obverse side of 2018 Silver Krugerrand Coins is a depiction of Paul Kruger. A famous Boer figure in South Africa during the First Boer War and the years following this conflict, Kruger would establish himself as a vital political leader and eventually find himself elected the First President of the South African Republic.

The reverse face of 2018 1 oz Silver South African Krugerrands comes with an image of the national symbol of the Republic of South Africa. The Springbok antelope is native to southern Africa and is featured here in right-profile relief as it pronks along the grasslands of South Africa.

Please feel free to reach out to Silver.com with any questions about these 1 oz silver coins. Our team is available to you on the phone at 888-989-7223, online using our live chat, and via our email address.