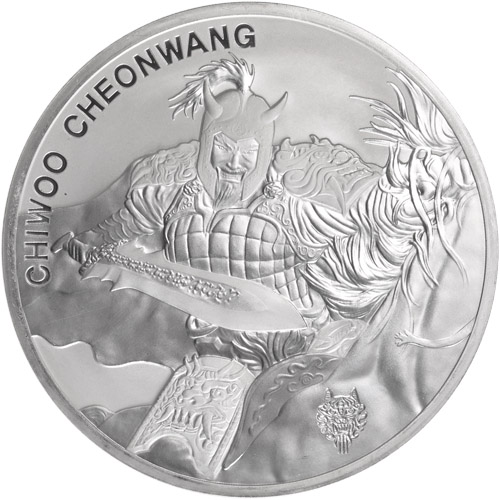 Any quantity available for $10.99 per oz over spot!

KOMSCO is the official mint of the Republic of Korea, or South Korea, and issues the Chiwoo Cheonwang medal as of 2016. The medals approved incredibly popular with investors and pressed KOMSCO to introduce another silver bullion series in 2017. The Zi:Sin Series introduces investors to the 12 Guardians who serve in god’s armies. Right now, 2018 1 oz Silver South Korean Chiwoo Cheonwang Canis Privy Medal is available to purchase online at Silver.com.

Each 2018 1 oz Silver South Korean Chiwoo Cheonwang Canis Privy Medals in this listing is available to you for purchase in Brilliant Uncirculated condition. These medals are available to you with individual protective packaging, mint tubes of 25 medals, or boxes with 250 medals housed inside of 10 separate tubes.

Chiwoo Cheonwang has seen increased interest with each passing year. Part of the allure of this annual bullion collection is the changing reverse designs depicting Chiwoo Cheonwang in different relief each year. This year’s design depicts the ferocious leader on horseback as he rides through the battlefield slaying his enemies with his sword.

On the reverse of 2018 1 oz Silver South Korean Chiwoo Cheonwang Canis Privy Medals is the image of Chiwoo. It is said that Chiwoo Cheonwang could control the weather and summon a blinding fog to help his forces win the day on the field of battle. His accomplishments in war and his perceived abilities led many to believe he was the God of War.

The included Canis privy on this side of the medal reflects the appearance of a dog. Canis is the second of the 12 Guardians released in the Zi:Sin Series. One of god’s most gifted fighters, Canis was also known as a loyal and faithful servant of god.

The obverse of all 2018 Silver South Korean Chiwoo Cheonwang Canis Privy Medals includes the common design element used on all releases in the Chiwoo Series. Here, you’ll find the image of Chiwoo’s battle shield. On the surface of his shield is the image of Do ggae bi. This hob goblin-like creature is said to possess the power to ward off evil spirits and was once hung from the edge of roofing tiles on homes to keep residents safe from evil.

If you have any questions about these silver bullion specimens, don’t hesitate to ask. Silver.com customer service is available to you at 888-989-7223, online using our live chat service, and via our email address.