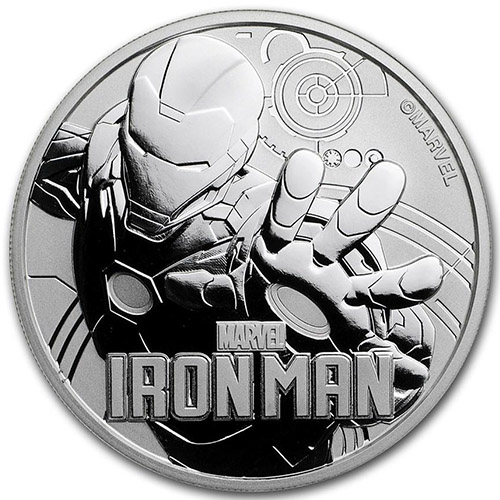 The new Marvel Series of silver bullion coins from the Perth Mint features six exciting designs depicting the most famous superheroes from Marvel Comics. Many of these characters featured in this collection have appeared in feature films in recent years, and all of them come from the Silver Age of Comics in the 1960s. Right now, 2018 1 oz Silver Tuvalu Iron Man Marvel Series Coins are available to you online at Silver.com.

When the Marvel Series of silver coins debuted in 2017, the Perth Mint launched with one of the characters making a return to the big screen after a long absence. Spiderman was one of the first Marvel Comics Universe characters to feature in major films in the early 2000s, but has since been sidelined in favor of Iron Man, Thor, the Avengers, and Black Panther (more recently).

With a new film coming out though, Perth Mint launched the new series with the image of Spiderman originally created by Stan Lee and others at Marvel. Continuing on with that series, the fourth issue of six in the collection arrives with fan-favorite Iron Man gracing the reverse side of the coins.

Iron Man first appeared in a March 1963 issue of Tales of Suspense. Tony Stark, the American business magnate, playboy, and genius scientist initially creates his suit and fights evil while concealing his identity. Unlike DC’s Batman though, Stark is a showman at heart and eventually unveils himself as the legendary Iron Man.

On the reverse of all 2018 1 oz Silver Tuvalu Iron Man Marvel Series Coins, you’ll notice an iconic depiction of Iron Man, along with engravings of the “Marvel” symbol and the name of “Iron Man” in all bold, capital letters.

The obverse of the Silver Tuvalu Marvel Series Coins bears the image of Queen Elizabeth II. Her Majesty has featured on British and commonwealth coinage since her ascension to the throne in 1952. Designs change with time, and this particular right-profile portrait is the fourth-generation effigy created in 1998 by Ian Rank-Broadley.