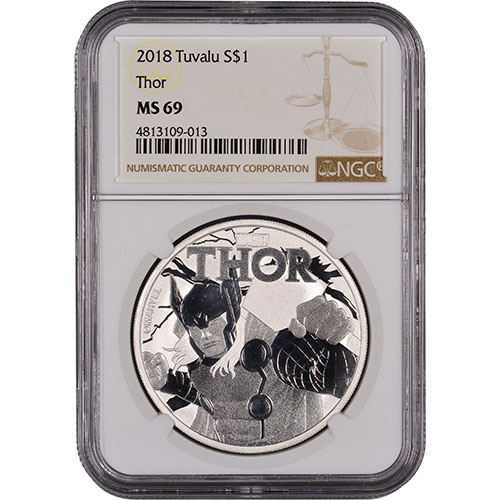 Based upon the Norse deity of the same name, the Marvel Comics superhero Thor was introduced by Stan Lee, Larry Lieber, and Jack Kirby in a 1962 issue of Journey into Mystery. Thor is the Asgardian god of thunder, and he appears second in the Marvel Series of silver coins for sale from the Perth Mint. Right now, 2018 1 oz Silver Tuvalu Thor Marvel Series Coins are available to purchase online at Silver.com with NGC certification.

Each 2018 1 oz Silver Tuvalu Thor Marvel Series Coin available here today is in near-perfect condition from the NGC. Coins with a Mint State 69 grade exhibit full, original mint luster with a maximum of two minor detracting flaws. Drawbacks in the coin’s condition are limited to minuscule hairlines and contact marks, and found only outside the primary focal areas of the coin’s surface.

Thor has featured in countless Marvel Comics since his 1962 introduction, and more recently has made several appearances in Marvel Comic Universe feature films. Eric Allan Kramer was the first to portray Thor in the 1988 television movie The Incredible Hulk Returns. More recently, Chris Hemsworth has portrayed Thor on the big screen in The Avengers series of films, as well as 2011’s Thor, 2013’s Thor: The Dark World, and 2017’s Thor: Ragnarok.

On the reverse of 2018 1 oz Silver Tuvalu Thor Marvel Series Coins is the image of Thor derived from the original comics. Thor is depicted with his magical hammer, Mjolnir, which gives him the power to fly and control the weather. Only Thor can lift and wield the hammer, doing so effortlessly.

The obverse of Silver Tuvalu Thor Coins bears the portrait of Queen Elizabeth II in right-profile relief. Her Majesty is captured here in the fourth-generation design from Ian Rank-Broadley and was created in 1998 for use on British coins from the Royal Mint.

Perth Mint is the oldest operating mint in Australia and was initially opened in 1899 as the third and final Royal Mint facility on the continent. Today it is an independent mint operating outside the Royal Australian Mint system and is controlled by the government of Western Australia.