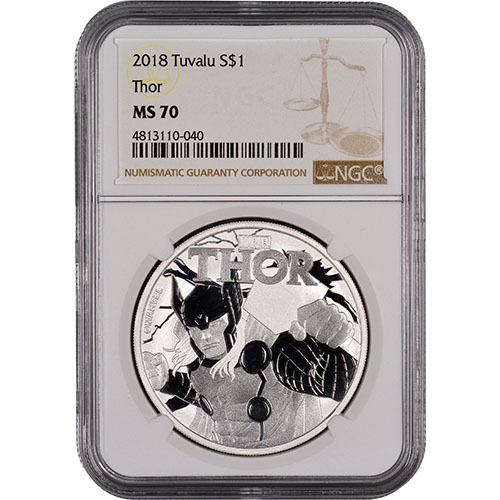 The Marvel Series of silver for sale from the Perth Mint takes collectors into the universe of Marvel Comics. The superheroes in Marvel Comics are the brainchild of writer Stan Lee and artist-writer Jack Kirby, who together developed many of the characters that have delighted children for decades. Today, 2018 1 oz Silver Tuvalu Thor Marvel Series Coins bring a Norse god to silver coins and are available to you at Silver.com.

Thor is a god from Norse mythology whose father is the Father of Gods in Norse culture, Odin. His favored son, Thor is a powerful god who can control the elements and even fly with his mystical hammer Mjolnir in hand. One of the greatest mysteries and powers of the hammer are its ability to be wielded only by Thor, and no other man or god.

All of the 2018 1 oz Silver Tuvalu Thor Marvel Series Coins available to you online at Silver.com earned a perfect certification from the Numismatic Guaranty Corporation. The NGC issues Mint State 70 grades to coins with full, original mint luster that lack all possible detracting flaws.

The obverse of the Silver Tuvalu Thor Marvel Series Coins bears the effigy of Queen Elizabeth II. This portrait of the Queen is depicted in right-profile relief and was developed in 1998 at the Royal Mint in England. Designed by Ian Rank-Broadley, this effigy of Her Majesty is the fourth-generation image of the monarch used since 1953.

On the reverse of the 2018 1 oz Silver Tuvalu Thor Marvel Series Coin is the design of the mystical god Thor. A leading figure in Norse mythology, Stan Lee and Jack Kirby introduced American comic book fans to Thor in 1962 when he appeared in Journey into Mystery.

Perth Mint was founded in 1899 as the third and final Royal Mint location in Australia during British rule. The Perth Mint outlasted the Sydney and Melbourne Mints, and today exists as an entity of the state of Western Australia.

Please feel free to reach out to Silver.com with your questions. You can call our customer service team on the phone at 888-989-7223, chat with us online, or simply send us an email with your inquiries. Don’t forget that Silver.com posts spot silver prices on our website at all times!