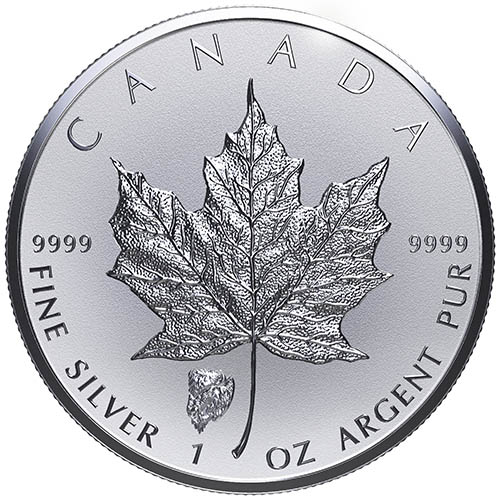 The Wild Canada Series of Silver Canadian Maple Leaf coins from the Royal Canadian Mint revives the creatures depicted on one of its most popular wildlife-themed collections of recent memory. The release features six unique privy marks reflecting the original animals and order of release from the Canadian Wildlife Series. Today, 2018 1 oz Wood Bison Privy Silver Canadian Maple Leaf Reverse Proof Coins are available to you online at Silver.com.

The Canadian Wildlife Series was issued by the Royal Canadian Mint from 2011 to 2013 with two designs issued annually over that stretch. Pierre LeDuc created the original designs used in the first four releases, with Emily Damstra taking over to complete the series with designs of the Antelope and Wood Bison in 2013. Starting in 2016, the Royal Canadian Mint issued the Wild Canada Series to revive these popular creatures on a privy mark collection of Silver Maple Leaf Coins.

All 2018 1 oz Wood Bison Privy Silver Canadian Maple Leaf Reverse Proof Coins are available to you here today with protective flips, mint tubes of 25 coins, or mint boxes of 500 coins with a total of 20 tubes. The coins all have a reverse proof finish, indicating the presence of mirrored, clear designs overlaying strong, frosted backgrounds for stunning visual contrast.

On the reverse of 2018 Wood Bison Privy Silver Canadian Maple Leaf coins is the design of the sugar maple leaf. Created in 1979 by Walter Ott, this image appears on all versions of Canadian Maple Leaf program. Below the maple leaf is a small wood bison privy. The wood bison is a distinct northern subspecies of the American bison that once roamed from the boreal forests of Alaska and the Yukon Territories to British Columbia, Alberta, and Saskatchewan.

The obverse of 2018 1 oz Wood Bison Privy Silver Canadian Maple Leafs features the right-profile portrait of Queen Elizabeth II. This design was created in 2002 by Susanna Blunt as the fourth-generation image of the Queen to feature on Canadian currency. Blunt was just the second Canadian to ever design the monarch’s effigy for the Royal Canadian Mint.

Please feel free to reach out to Silver.com with questions about these 1 oz silver coins. You can call us at 888-989-7223, chat with us live online, or simply send us an email with your inquiries.